Grant Elliott's message to Pakistan. He was being a good host of course. Confused? Grant Elliot is a born Saffer who left the country in 2001. And you thought I only supported the Kiwis because of their badly-bearded, magnificent captain. Well, I didn't. They have the South African connection. Actually, I didn't know till a few hours ago that he was a Saffer, but I am going to pretend anyway. And don't you dare suggest that by that theory, I should be a supporting England as well. They went to the nation that thinks all of cricket is defined by one miserable urn...the contents of which are not even properly known! So it's not happening.

Right, back to Grant Elliott. How awesome is he? Playing the role of a stabilizer while the wickets were tumbling and then unleashing like the starving lions in my basement at the right time. Scoring 16 AMAZING runs off Umar Gul. Gul the fool had no answers to the belting. And he is supposed to be Pakistan's best death bowler. Beaten to a pulp by a Saffer. It warmed my heart and brought the temperature up to a wonderful zero degrees. 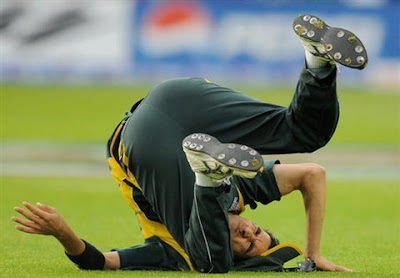 Clearly he was bowling out of his...

Let's spare some love for the Kiwis now. Ian freaking Butler...what a man! Actually he isn't. He has under 30 wickets in his career so far and was only selected for the team when 007 got injured. He was also the softie who sat out the first part of the tournament because of a stomach bug. But he got the wickets of Akmal, Malik AND Afridi. The three Pak batsmen that could have let loose all hell on the Black Caps. Yup, shown to the door by a Butler all right! Okay that was terrible. But the Kiwis won and I don't care.

Again, no New Zealand post will be complete without the mentioning of Dan the man. So here we go. Three great wickets, a promotion of himself up the order and 41 runs told us what we already knew. Dan is the most cleverest Kiwi alive. And he is the real Harry Potter. One day, Kiwis everywhere will fly because of him.

A similar picture to the one below, and the type of wicket that lead to this pathetically arrogant celebration has haunted me since the semi-finals of the T20 World Cup. Now it just makes me laugh. A psychotic laughter that Afridi can clearly hear. Hence the lack of joy in his expression. 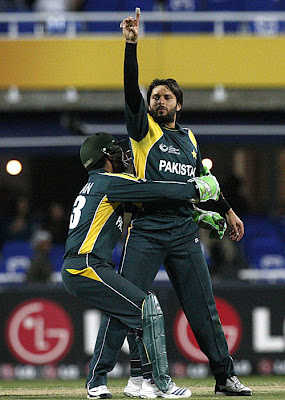 Why call Gul a fool? Anonymous was right about you.

That Afridi celebration is the best in world cricket but you don't know about cricket and celebrations do you? You're just a hater.

Jealousy, pure jealousy. Your support is defined by the hatred of other teams. How sad.

I suppose all of the Bangladeshi team were born in SA too right?

And you can't get more clever than the 'cleverest' :P ... although you'd put a good case forward for someone being dumber than the dumbest.

This is war. You can sleep in the basement with the lions tonight, I'll check on you in the morning but I'm sure you'll be fine as they prefer meat rather than fat.

Stani, Gul is a fool because he bowled like one.
You are the real hater! My whole post is about how wonderful the Kiwis were and all you saw was hatred. Tsk, tsk. How very misanthropic of you.
I support Bangladesh because it's my birth right.
Stani go smell the flowers outside. Will do your bitterness some good.

Gosh! Would you two just hurry up and get it on already? This weird sexual tension is creeping us all out...

Lionel wash your mouth with soap! Why do you wish me ill Lionel? WHY!

Stani is betrothed to Esra Star. As much as I am opposed to this union, I must accept it, because Es is awesome. Sigh.

My apologies Lionel. It's her fault, she wants to tie me up and take away my innocence. The reason she can't is because Es will open up a can of whoop ass and Purn will go running. I'm glad it's got you guys on the edge of your seats.

Purnmeister, only snakes tsk tsk. The Kiwis were only wonderful because you hate Pakistan. How misanwoteva of you! And if that is your definition of a fool then the whole of the South African team must be fools. Shame, you lose.

You support Bangladesh? How? Where? I could never have guessed. I thought you were a South African born in New zealand that loves a nice English tea and an Aussie barbie.

Es, watch out for the snake's 'awesome' comment. This is the same snake that said cricket was more important than you.

Stani, you know what you and Gul have in common? You both speak/bowl from the same place.

So many questions, so few answers.

Kiwis played well in this match. I liked the way Elliot and Vettori batted. Let's see whoz gonna win the finals. Any guess?

Well since you are the betting maestro, you tell us :). How are people voting on your site?