Shane Watson received the gazillion dollars watch for the finals. It's an ugly watch by all standards, so I won't be putting up a picture to preserve the sanctity of my blog. But here's a picture of Watto realizing that he will only be able to pair this with the jacket during the Elton John musical. 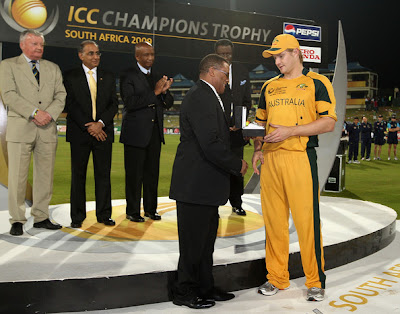 Ricky Ponting got the golden bat for scoring 288 runs in the tournament. I am shattered by the fact that I have yet to find a picture of this magnificent bat and ball to share with you. They really are the sexiest things you have ever seen. According to records, ICC's not mine, Wayne Parnell remains the highest wicket taker in the tournament with 11 wickets. He therefore gets the golden ball. Since there is no picture I'm guessing Parnie did not show to pick it up. His excuse better be 'practicing for an English demolition' because it is a disgrace to not show up at your own event for an honour. Specially when further inspection reveals that the 11 wickets is accompanied by an Economic rate of 7. I hope Majola personally delivers this one to Wayne, along with a few smacks on his head.
Posted by Purna at 12:11 AM

No, Parnell wasn't there to pick it up. I thought they might have forewarned him so he could at least send someone in his place - or make on of those cool vids like at the Oscars - but no, we were not blesses.

Or perhaps he just doesn't care for a golden, diamond studded ball that will inevitably be the brunt of every joke at his next dinner party??

I think he was too ashamed. The Saffers lost because of their bowling after all!

But it's an awesome ball! And I don't think it's diamond studded, just plain golden. If he doesn't want it, I'll take it.