The Bald and the Beautiful

It was pretty much the story of Hersch, JP and Bravo wasn't it? Bravo being the beautiful for his awesome batting. No points for guessing who the bald are.

Ravi Rampaul made a guest appearance towards the end of the Cobras innings. Damn, that was some fine example of death bowling! But it still won't get him in the IPL. His name is too Indian-sounding. And clearly the IPL has nothing to do with Indian players. Sorry Ravi.

I am actually indifferent to the result. It's not like this is the Proteas. I only went for the Cobras because of Hersch and he thankfully decided to finally rise from ground zero. He did his part with the batting and the fielding. If he could bowl, he would have done that splendidly too. It's not his fault that the rest of the Cobras were shockingly bad. Speaking of shocking, here's a funny picture where Davids actually looks surprised after dropping the second catch. 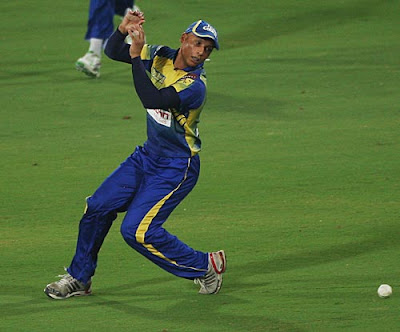 Focusing all his energy on the drop...
It's funny because he took some amazing catches against Bangalore in the first match. Meaning as I laugh, I am crying in the inside.

Right, so T&T are through to the finals. You know what that means right? Kieron is sharpening his bat on a strop while Moises is praying for Anubis to come take him away. But that ain't happening. Anubis will be too busy chilling with me and cheering KP on as he busts your balls again and again and again.

Cricket balls that is.
Posted by Purna at 8:14 PM

Had the Cobras held on to their catches it would have been an awesome match!

Bravo ...failed with the bat and shined with the ball in all other matches and now he decides to do the reverse.. waiting to see what he will do in the finals :)

Lee vs T&T openers should be some fun!

Due to work commitments, I am yet to watch the highlights of this match so I will thank you all to not talk about it until I do ...

No, just kidding. I have been hearing about awesome catches being given not out and all sorts so I have recorded the hightlights just haven't had a chance to watch them and now I am at work again while the final is being played!

Adi, they were pathetic. They deserved to lose really.

Sid, since when do you actually work at your job?