Well not completely. Page 2 from Cricinfo may just be one of the best pages of the site. Mainly because it's not filled with stories on the pseudo home of cricket. One of the features of Page 2 is something called a Doppelgangers-Separated at birth. It involves people sending in pictures of non-cricketing celebrities that look like cricketers. Here are the two latest ones. 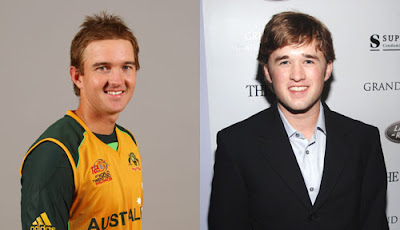 Nathan Hauritz and Haley Joel Osment, two lads who gave the lie to their boy-next-door demeanour - one with a DUI charge, the other with six wickets in his first Ashes Test. One saw dead people; the other, er, dead pitches.

The resemblance is quite freaky. They even have the same eyebrows. Although, taking six wickets is nearly not as bad ass as a DUI charge. Hauritz could do better if you ask me. Like beating the living crap out of Merv for not picking him for the last Ashes test. Australian wounds reopen... 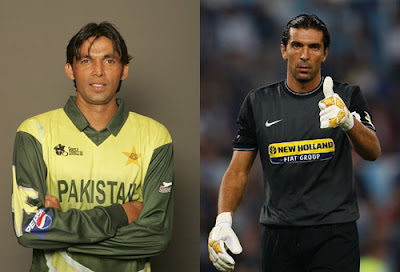 One spent much of the last two years sidelined by injuries, the other ditto by various scandals. Sorry, Mohammad Asif, you've not done a near-enough good job of convincing us you're not, in fact, Gianluigi Buffon.

I nearly bit somebody's head off at this one before reading the caption. Yes, let's compare a drug abuser to a living legend. Buffon is all man. Asif, needs drugs to even be considered a boy. Buffon is the best goalkeeper of all times, second only to Oliver Kahn. Asif, debuted for his country in 2005 and has been focusing solely on getting into trouble since then. Other than the dark, shiny hair, there's no connection. None.

Page 2 also has a Hot or Not section. Just in case you didn't know it already here's what is hot right now and what is not.

Hot: Herschelle Gibbs
Hersch chose to play for his regional side, and not his IPL one, in the Champions League. Voila, the Cobras made it into the next round, while Deccan were dumped out.

Not: Brendon McCullum
The first of the freelancers, Mac picked wrong when he chose to show up for Otago. New South Wales, for whom he had played earlier, are looking good for the title.

Not entirely true, Hersch was refused by the Chargers. But they paid for it so justice has been served. And I am always happy when Baz is put down. There's just too much hype about him. Seriously people, IPL 1 was a long time ago. Hersch on the other hand was, is and will always be hot. Only because he is a brilliant cricketer of course!

to even consider a resemblence between Hauritz and Osment is just so disturbing ... I'm lost for words.

Maybe if you make Hauritz wear shorts...maybe the resemblance will be better then? ;)

Have you seen the guy in shorts? It's very scary.