How the Saffers are responding

Mickey and I have talked it over and we have decided to fight fire with fire. So these are the Saffa strategies. Only part of it though. We can't have the English spies stealing our secrets. 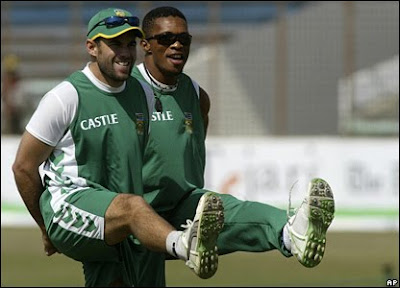 To combat the line dance the Saffers have come up with their own routine, the Russian Taekwondo. When the Poms trap them in their line, the Saffers are going to break out in this dance in true Bruce Lee style and kick the English everywhere. They are then going to calmly proceed towards the crease. 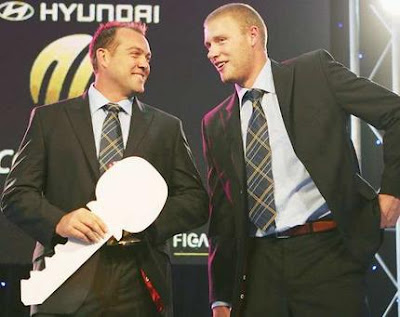 Offended by Broad's attempt to be an all-rounder, Jacques is going to the man who has already betrayed England to find out how to save Stuart from the delusions. Living up to his true character, Freddie gave Jakes the key to the room where the giant tennis ball is kept. Turns out Stuart's brain is in the ball. Smash the ball and all will be well. 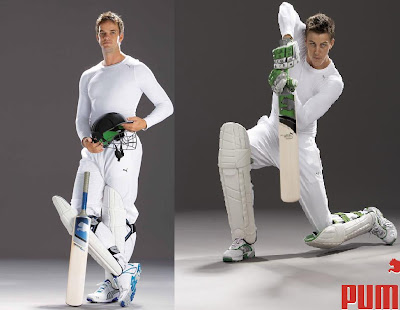 To fight the Poms' boy band looks, Albie and Morne's spirit are going to wear even whiter, tighter outfits to scare the living crap out of the staring Brits. Puma has informed us that if they stare too hard at the whites, they might even go blind. But that might not make much of a difference, seeing as they field like blind men to begin with. 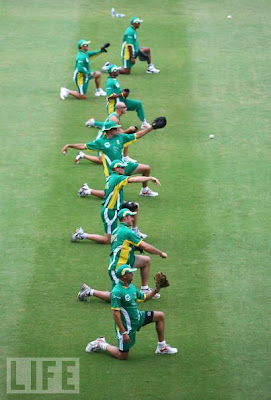 While the Poms do the wave to signal their Queen, the Saffers are going to form a line of their own and throw cricket balls at them. The one who hits Luke Wright the most will get to take him home to do whatever they please. This is a special incentive for Graeme Smith to get his brain working for once. Finally, the Saffers have built giant shoes courtesy of Gunther's giant feet, to kick the Poms in their niggle-trapped bottoms when they bow down. Just like Gunther, these shoes go psycho when unleashed. They will stick to the Poms till they find out why there is an epidemic in the English camp that involve men, their buttocks and tightness.
Posted by Purna at 4:57 PM

Yeah? I feel the opposite. England have had to rely on individual performances to win the Ashes. The Saffers on the other hand beat the Aussies with an all-round team performance. With tests, they have 5 days to put things together, but not with ODI's.

I found this blog through Amy's and I have to say that I would probably like this in the same way I liked Amy's when I first saw it because it was so original, but a lot of the time this blog seems to be a cheap knock-off of Amy's.

I don't mean any offence by this and I hope you do keep blogging because you like to do so, but the closeness of the blogs is a little unnerving and it just seems like you've taken a lot of what made Amy original and tried to make it your own. The style of Amy's blog is replicated in this one, and I know you say she's an influence on you, but don't you think that it might even be too big of an influence? It seems like you're almost mirroring Amy's blog. What made her blog interesting what how different and refreshing it was. It seems to have spawned a lot of imitators.

Again, I mean no offence by this. I also don't think I'll stop by again because it reminds me too much of Amy's. A unique personal style is something to be recommended in bloggers.

Alex, no offence taken. I've actually been wondering when someone will call me a cheap knock off of Amy.
See the truth is, when I first came across Amy's blog, the first thing I said to myself was 'Wow! I could have written that,only a worse version'. What attracted me towards Amy's blog was how alike our thoughts and sense of humour were, and the fact that she was also a Saffa fan. I know people won't believe me because she came first and there's nothing I can do about it. But please believe me when I say that I have not actively tried to replicate Amy's posts. Meaning, I don't actually go to Amy's blog, look up her posts and then write mine.
I agree that every blogger should have a unique personal style and I would be ashamed of myself if I copied her because she was one in a million and to copy her would be a disgrace. My posts come to me when I am browsing through cricket news or watching games. This one came to me when I was looking through a bunch of pictures of the Saffers and I thought I would do an English one first.I really enjoy the awkward cricket pictures as much as Amy did and wanted to put them on my blog. I don't know how to write serious stuff about cricket because I am not an expert and sarcasm comes easy to me. This is really they way I think.

I am sorry that you won't be stopping by again and I am sorry for not being able to contribute to the blogging community in any new or refreshing way.
Maybe I shouldn't have started blogging in the first place.

Maybe I shouldn't have started blogging in the first place.


Why would you say that?
You must continue to write. Honestly there are quite a few times when I find myself disagreeing with your views, but your blog is still quite a lot of fun.

Yes, the resemblence with Amy's blog is uncanny. However, the fact that you keep writing the way you do proves this is who you are. And if that means you sound like Amy, so be it.

You keep at it girl!!

Purna, I love your blog. I think the posts are original and funny and I really enjoy the comments you and I make to each other through our blogs.

Please don't stop writing and don't listen to anyone who calls you a knock off - there is no such thing as a truly original idea and I'm sure if people weren't so single minded they would see that even Amy's blog was influenced by others.

Don't ever EVER think you should not have started blogging - that would be very selfish :-) who would I read every day if you weren't here?

I am sorry that you won't be stopping by again

I'm not! If someone is so pained by the similarity in two blogs (after one has stopped) to come and leave a nasty comment about it (no offense "Alex" I think you're a swell guy and all but you just seem to be a cheap knock off of a nasty person), I think people are better off without their comments.

Purna, I tried finding contact info but I couldn't, can you please send me an email: soal.cricketblogSPAM@ALOTgmail.com (leave out the capital letters). thanks