The other De Villiers

Once upon a time, not so long ago, a lovey blond name AB de Villiers met a singing sensation called Ampie Du Preez. It was love at first sight. They did not go a day without each other, frolicking along the streets of Pretoria as often as they could. As their bond strengthened AB and Ampie decided to take their relationship to the next level. Now to many, the next level would have been moving in together but AB was obsessed with passing on his freakishly perfect genes. Before long, AB demanded that Ampie have his baby. Ampie was trapped but loved AB too much to do anything about it. So they went about the usual business of baby-making and after one happy day when the stick turned blue, AB and Ampie started their countdown. Very soon, a baby boy arrived.

He took AB's surname because AB is the more famous one of course. But note, the Du Preez is also there. It is irrelevant that he is known by his initials CJ, just like his daddy. After all, love is blind and that is exactly how Ampie saw it.

It is also irrelevant that Cornelius grew up to be a cricketer. His parents introduced him to both music and cricket. But what Ampie did not know was that AB secretly played their 'hit' single to CJ every night till he concluded that if his singing voice was anything like his daddy's, he would be publicly tortured in a square one day. So CJ chose cricket and AB rejoiced, waiting for his baby to become the next start batsman for his country.

Therefore, it came as a huge shock to him when CJ established himself as a bowler by producing two beautiful deliveries that saw the Diamond Eagles through to the second stage of the Champions League. They were dead on, straight and fast. AB was livid with rage! His anger heightened when he saw CJ's Cricinfo profile brand him as "a quick bowler who can also bat a bit". AB was now foaming from the mouth and nearly having an epileptic fit when all of a sudden it all clicked. The timing, the tall lanky looks, the fast bowling, the person that was left out from the squad...

Turns out when AB was busy training for the Proteas, Morne was the one around to console the lonely Ampie Du Preez. And Morne's genes are superior to AB's. 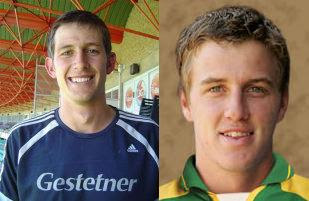 Some say the tricks of fast bowling are passed through the blood line
Posted by Purna at 10:05 PM

I love you for clearing it up to me! No, really! All these says I wondered who could this CJ be?? and why does he use my AB's surname?? but am glad I know the story now.

Now I'll love CJ too, because after all he belongs to AB.
By the way, am really interested in knowing Who is the mother of this kid? AB or Ampie?

ooh and one more thing. Theres a cricketer from SA who plays for Bangalore, named Dillon DU PREEZ (am sure u heard of him). wonder whose Ampie's partner in this case? ..wow Ampie's a whore man!

btw after reading this article stumbled upon ABD's website its quite good :)

btw CJ bowled the eagles to the league stage ( super 8's) not the semis.

MJ, it was my duty. Too much of a coincidence to overlook! Yes, I have heard of Dillon Du Preez...I am just happy Ampie got a chance to pass on his genes as well. And to answer your question all three of them are CJ's mommy...freaky eh?

Ach, stop sulking. One day AB will be able to give his kookaburra bat to his real children as well. If you ask me nicely, I'll tell him to make you one of them.

Adi, thanks. I'm fixing the mistake. Stupid matches are so overlapping that I can't even make out which game belongs to what stage!
You should visit Mark's site..it's better.

Ampie's loneliness drove him mad and he wrote a song and made a music video with his mate Sean Else called "Val Sonder Jou", which is Afrikaans for "Fall Without You".

Haha! That is brilliant! Thanks Anon!