I was doing some research on which spinner the Proteas should play against the Brits. Since ROFL's alien friends have yet to give him permission to play tests (in five days they could invade half a galaxy) and Johan Botha hasn't played in them since February 2008, the only other option was Paul Harris.

I wish it was Paul Adams but unfortunately he was the frog that became a prince when the Proteas kissed him into the team. And the prince sucked at bowling.

Annnyyywaaayy, once I had made peace with the new Paul, I merrily frolicked around the internet reading up on Harris and building his case. That's when I came across this. 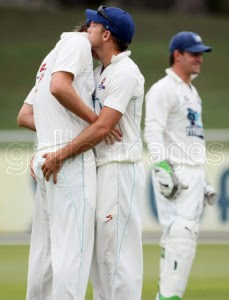 Amy S. was famous for calling out on the secret relationship between Harris and AB. I always thought that it was one of Amy's ingenious skits. But this photo proves that she was right all along. I must say that the photographer managed to grab his camera at the right time to capture the intimacy of the moment. Not that the camera was the only thing that was grabbed to make the picture perfect.

I hope someone will kindly call Harris' wife and explain to her the virtues of sharing.
Posted by Purna at 12:26 AM

This is Francois Du Plessis, not AB! haha my AB is innocent!! :D

I swear it looks like AB. I'm sorry to break it to you like this MJ. But don't worry, I will also tell you all about the virtues of sharing.