These fools can't seem to keep themselves out of the news. It's not pleasant to have every god damn Crapinfo headline about these bunch of idiots. Then again, why am I suprised? It's Crapinfo. Based in UK and run by the freaking Queen!

First of all, who comes up with these headlines and why can't they reveal themselves instead of using 'Cricinfo staff'? Second of all, notice the terms. It is one buttock and the injury is a niggle. What the fuck is a niggle? An ant bite? In which case, I must rename him Dolly. Poor, delicate Dolly is crying because he destroyed an ant hill and the mighty colony attacked him with tiny swords that gave him a niggle. The niggle has henceforth ruled him out the Champions League. For fuck's sake! If you are going to pull out of a series because of fatigue then say so! Or at least get a more respectable injury. Bloody Poms!

I am slightly grateful for the injury though. It's because of this line:

Collingwood's injury is the same as the one which ruled out England all-rounder Stuart Broad from the Champions Trophy semi-final.

I checked with Jimmy and he didn't think Colly was edible. I certainly didn't injure him. I was here the whole time. Posting. So what is this? Brotherly love? I believe the family that injures their buttocks together, stays together. Or something pathetic like that. 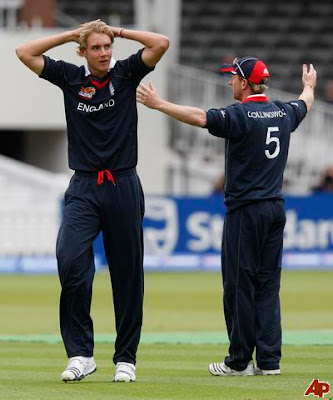 I did it just for you bro...just for you
Have any of you realized how the Crapinfo staff has sneakily used the term 'all-rounder' to describe Broad? Broad bats twice in the Ashes and he becomes an all-rounder. Next we'll be hearing that Graeme Swann is the new Shane Warne. What? I didn't say it! They did!

FYI Stuart, the person whose shoes you are trying to fill, that jellybean called Freddie, yeah he said that if he sustains another injury he will retire completely. If you are really trying to follow in his footsteps, you will do the same. Even if its a fucking niggle on your ass!
Posted by Purna at 2:22 AM

We must get to the 'bottom' of this...ahem

They are up to something. Biff & AB is out and now England is doing the same. They might be all preparing at a secret base on a secret island somewhere in the British Isles. It's all part of the conspiracy ;)

Go read this (the end is important)

Swann the new Shane Warne??? I'll build a bomb if anyone dare suggest it!

I think they all have the England tour of SA in mind. They don't want to screw it up so they are pulling out shit that don't matter.

Sid, start working on it. It's only a matter of time before the Poms say it on Cricinfo.

Stuybaby used to be a batsman ya know - that's before someone suggested that he use his hight and become a bowler. The English press think he is God - he has been likened to the next Flintoff several times.

When he is actually crowned the new Flintoff that's when my pre built bomb will be detonated!

Six, I guess they are mad at God for giving them such a shitty team. Which is why they are comparing Stu to him.

What's with all these bombs? Sid's building one, you already have one. You lot are very cool I must say