YEAH BITCHES! My stern talks never fail. Neither does my Shakib when he gets going. I was only able to catch the first half an hour of this match as it started at an ungodly hour and while I am usually up during ungodly hours, yesterday was the longest day ever!

Anyway, I caught enough of the match to see that Dolar and Nazmul were getting fucking hammered before Shakib the great stepped in to slow the run-rate down. How nice to see a spinner actually doing his job (*cough*Harbajan*cough*). I also caught enough of the match to realize that our pace attack minus Mashrafe is a joke. Which is sad and worrying and just a plain what the fuck situation. Specially with Pakistan, India and Sri Lanka all having effective genuine pacers in their teams now.

What pleases me specially about the match is that for once Shakib was not the doer of all. He killed with the bat and Razzak, my beauty, killed with the ball. 9.2 overs, 29 runs, 5 wickets, 0 extras. That is top-class bowling. Even if it is at home and against Zimbabwe.

But what to do with Raful? Bastard scored only 3 in a match where every other Bangladeshi batsmen went to double figures! But, the bastard also took 2 wickets. God damn! Somewhere, somehow he gains a lifeline the minute it looks like he is about to be dropped. But seriously, he should STILL be dropped. It's not like someone else wouldn't have taken those two wickets (probably Shakib). Honestly, how many times have you seen this picture? 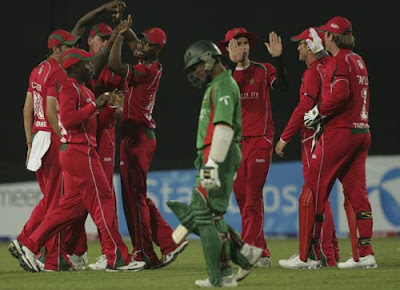 Way too many times. We are done being patient with him. Go back to the practice nets you moron! While we revel at the subjects of these pictures. 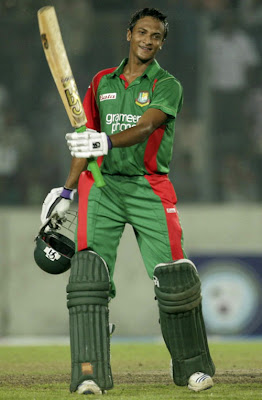 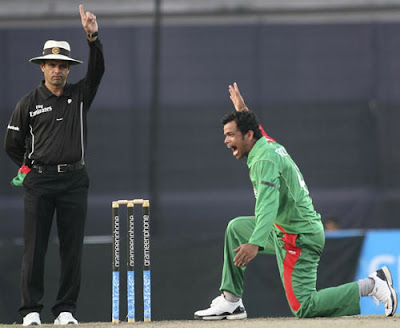 No comment on this post, ridiculous! We might as well play with 5 spinners. Razzak can open the bowling, he doesn't flight the ball anyway so it'll be on line with some turn. I do not understand why they are playing Dollar during a recession.

Ashraful is doing his best Afridi impersonation. I will not go into a rant on his technical deficiency, life is too short.

I had some more points, but I forget.

Anon, I wish Talha Jubair was back. I miss him.
LOL. Yeah, life is too short to waste time on Raful. We need to replace him soon!

Why have you stopped blogging?