Once again, Johan Botha was accused of having an illegal bowling action. Once again, some cricket board made him go through the test and once again Botha has been cleared. Has it occurred to anybody that Botha might have found a way to cheat in this tests by now?

Not that he did, because his bowling action is JUST FINE. But I wonder what the world has against Botha. CSA won't let him captain the Proteas even though he is clearly a better captain than the Buffalo, Mickey won't let him play in tests and every god damn rival player calls him a chucker the first chance they get. I think this is what they call a midlife crisis.

But Botha is not alone in this. Soon-to-be daddy Albie also seems to be going through some midlife crisis of his own. 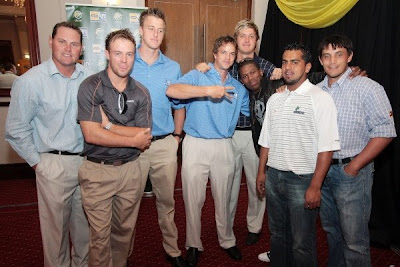 Trying a little too hard Albs! But fear not. Your good friend Johan will guide you through this. Together the two of you will conquer all obstacles of middle age and emerge victorious, all the while knocking the Poms around.

Notice Morne's expression is saying 'Oh no you didn't!'. I should get a certification for fabulous face reading.
Posted by Purna at 2:25 PM

Murali frequently got accused of chucking, usually by the Australians to be fair.

I was inclined to agree with them every time he got near one of Shane Warne's records, but most of the time I figure that if you can bowl anything that even resembles a doosra you are pretty damn good and should be left alone.

Why do chucks even exist ?

Is it just me or does Albie Morkel look something like a duck? :O

Sid, even without the doosra Botha's pretty good. People are just jealous.

Chandler, I don't know what you mean. But if you are asking me the history of chucking..I have no clue!

Mia, poor guy is freaking out about being a daddy.

CT, he does.At times, he even runs like one...that's when he gets run out :P.