The Bingles announce a wedding date

Settle down. The subject was just to make his female fans cry. They haven't announced anything, but they will soon because apparently Clarke is interested to play in the IPL next season.

His official statement says it's because he is the new Aussie T20 captain and wants to get experience for his country and the timing is just right, with the 'huge' T20 World Cup coming up. Sure, we'll buy that. Till you announce your sickeningly expensive wedding to the Vampire Queen. 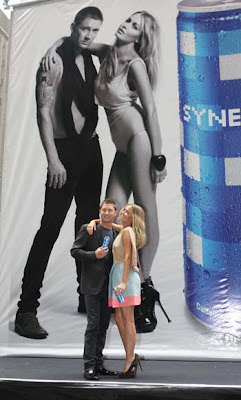 Sources say this is why Michael needed to be injured...
I've just had a random thought. Are there any cricket couples that we like? I don't mind Tricia and Shaun Pollock but that's only because they were never all over the place. And Shaun is retired now, so we don't get to see either of them often. But I really can't think of anybody else. How can that be? There must be some that don't make us wish murder was legal! Someone? Anyone?
Posted by Purna at 12:52 AM

Well, I certainly dislike Di and Nathan Hauritz ... but that's just me.

Georgie and Simon Katich are lovely, but pretty much everyone else needs shooting.

How come the WAGS of teams other than Australia and South Africa aren't everywhere? I'm sure they are just as pretty and annoying!

The Indian WAGS are well... how should I say this... plain.

Have you seen Vinod Kambli's wife?

She is a beauty; but are we still considering Kambli a cricketer?
;-)