I'm seeing red at the moment. Speaking of which doesn't Bouch look good in the red and gold? Good enough for him to give up his green forever! Okay, I take that back. But Boucher really has to stop pissing me off! 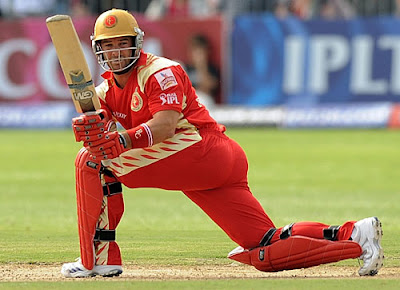 Stop it!
And Jakes really has to stop being such a bully...but only when it comes to his team-mates. He can bully everybody else, it's really funny to watch.

Not that it got to iron-man JP. Won't it be great if JP is actually one of those quiet ones who secretly has the ability to go all Norman Bates on people? Only in the context of cricket of course.
Apparently he is. He just hit the Dilscoop...or the Dumiscoop, as Harsha renamed it. Not very clever, but I'll take it.

Kill with the bat JP. Just with the bat. Leave the rest to me.
Posted by Purna at 12:50 PM