Really good day actually. Both my teams won. Yes, I do know that Hersch didn't play. But that's only because he can't be bothered wasting his time and energy against silly teams like Victoria. They give games to red-headed monstrosities like McDonald. Hersch cannot be exposed to such harmful radiation. So he's resting, for the bigger games.

The highlights inform me that Victoria was 0 for 2 by the third ball. I really enjoyed Zondeki's second wicket. Specially when the commentators made some joke about Hodge being non-Australian for walking. Insult to injury. Just the way I like it.

In case you are wondering what the suspicious looking bag in the stadium was, it was Sybrand's ride. I have decided that he is the world's first intelligent zombie. Hence his face is devoid of blood and he lives in a bag. He was going to enter in his Hindenburg reincarnation but he needed the extra nap time to sniff them Bushrangers out in the field and maul them. So he came in his house. 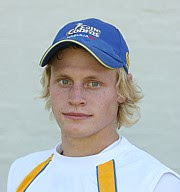 I see you...
I'm just sad I didn't get to see him bowl. The highlights I have showed only one of his balls, which went for four. It was hit by Andrew McDonald. It's okay. Everybody knows the Germans need to be down and out before rising like unstoppable blood-thirsty hyenas. Interestingly, zombies follow a similar pattern. Does this mean all Germans are zombies?

The end result of this Herschelle-less game was that the Cobras won. As if anybody expected otherwise. Yawn.

The Challengers also won, this time without much international help. Well not completely because out of the 4 wicket-takers, 2 were Saffas and the star batsman was Rossy. Much to the dismay of Indian fans, the highest Indian batter was Rahul Dravid. The BCCI should drop him more often, it really does wonders for his batting. Anil Kumble also contributed with wickets. But sadly the angel that looks after retired seniors that won't let go, can only focus on one player at a time. So today, it was Anil over McGrath. I think all the praises from the last match was too much for his pigeon brain.

The state of affairs as it stands now is that NSW has to beat Somerset and T&T has to beat Eagles for Trinidad and NSW to go through to the semis. Now that Delhi is out the Challengers might just qualify if the Cobras are beaten in their last league match. Victoria is sitting at the top of League B despite losing one of their two games and have already qualified.

Umm, what? Someone explain.
Posted by Purna at 4:01 PM

So yeah, that's that.

Oh, so the first league games are still counted. Hmm. I guess this way most of the teams get to play each other but each game is literally a knockout. High pressure!

Yup. too much riding pressure on the teams..

who are you supporting after the cobras that is!
I'm with T&T :)

P.S: Good that smith isn't there to make sure the Cobras loose :D

and hopefully gibbs will fire tommorow! :)

I am with T&T too.
But Smith will be back against the Poms :(. And there will be no Gibbs there to fire then!!

The Poms are hopeless outside pommyland! no need to worry about them :)

hoping smith does trips and all his weight falls on his shoulder or something and is out for a year the we can have a look at Botha the Captain!