I think, therefore I am

I've been thinking about this World XI teams as chosen by the ICC. I can understand why someone would be chosen as a captain, opener or pace bowler for these teams...but what is the criteria to be the 12th man?

-The fastest drink/towel carrier?
-The one who can keep the benches most warm for the playing XI?
-The one who is best in Chinese Whisper, i.e. relaying messages from the coach word-to-word?

If these are the criteria why did Harbajan and Thushara get it? Surely there are better 12th men than them!

1. Makhaya Ntini: Doesn't the pic say it all? He even keeps the crowd entertained. That gets him extra points. 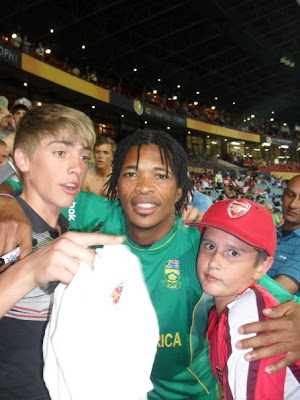 2. Dinesh Karthik: He even enjoys the drinks carrying. How can you give it to somebody else when we have a man who is so passionate about his job that he doesn't want to stop...till he slides into Ganguly in a team huddle? 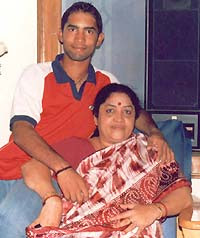 Emotional blackmail...do it for his Mom!
3. Glenn McGrath: Don't discriminate against the retired! He did some lovely work for the Delhi Daredevils. I'll even put up a nice picture of him warming the World Cup to strengthen his case. 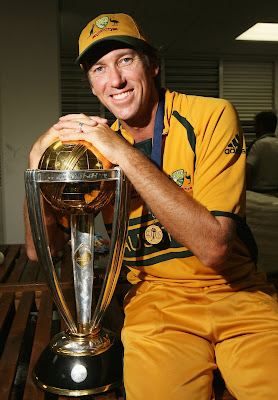 4. Bilal Shafayat: The poor guy hasn't even received an English hat yet, and they have already started using him to execute their dirty tricks. I know you are wondering where you have heard that name before. Ashes, 1st test. The one who pissed Punter off by wasting time on the field? We'd forgotten him completely. Isn't that the job of a 12th man? To be remembered only when he is on the field. He's so perfect for the position. 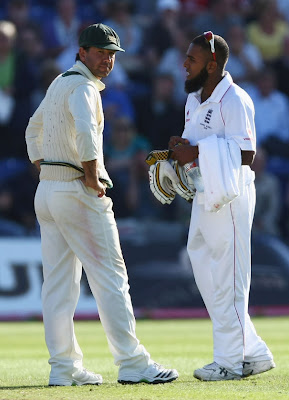 If only there wasn't a law against physical abuse...
Posted by Purna at 1:36 PM

Well you've failed to understand what they meant by 12th man here have't you? It's the guy who's performed (on the pitch) 12th best so cannot be included in the top 11 so is called the 12th man. It's not the 12th man in the conventional sense. You should know this because Harbhajan and Thushara have not been 12th men (drinks carriers) recently on a regular basis.

If it was a '12th man' 12th man award, then I'd give it to Bilal Shafayat. He single handedly won England the Ashes. Awesome performance.

I would want Dinesh Karthik to do this job forever. That would at least keep him out of the playing XI at least.

he sucks and he disgusts me!!

Stani, is that how they are selected then? Mine sounds better. More fun. The one who performed 12th best...that's 2 below the top 10. Who wants to be recognized for that?

sam,why select him for the squad in the first place?

Very well said Purna !
It sure is an interesting way! It would be better if there was an index to rank these 12th men :D Would makes things a lot more interesting :)

Maybe we should be the jury members at the next ICC awards.