It doesn't get any better than this

Bangalore just lost to Victoria, the team that has Andrew McDonald. Andrew McDonald who is possibly the most mediocre Australian player to have ever lived. Worse, this Mickey D's poster boy was the STAR in the game.

I apologize if your last meal has already been purged out, but at this point in the post there must be an illustration to show why Bangalore should hang themselves in shame. 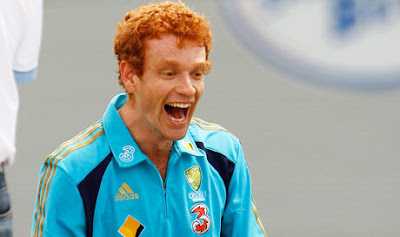 He is more than just a clown promoting obesity in children

You see it? He is an even more stupid version of Ronald McDonald and seeing as RM has a big red nose as well, that's really saying something. If you think I am judging his cricketing abilities based on his looks alone, I am. But his stats on Crapinfo backup my claims.

Bangalore should just have forfeited the minute Jakes was declared unfit, to save themselves from this embarrassment. I mean, yeah they have three other Saffas in the side who should have bailed them out AGAIN but the thing is:
Dale still thinks this is a paid holiday
ROFL is upset because I have yet to file my adoption application
Bouch secretly plays for the Cobras

Anil Kumble should have talked to me before the game. When will they learn?

Anyway, apparently Bangalore has to win against Delhi to go through to the semis. Whatever.

Can the real cricket start now?
Posted by Purna at 1:29 PM

you can't blame them they all got out laughing like hell seeing mcdonald bowl... ;-)

I never thought of that SP. That is unfair advantage. The ICC must do something about it :P.

Chris Rogers is on my "smack" list for, amongst other reasons, being ginger. This guy is making him look brunette.

The good news is that the Bushrangers are on their way home very soon ...

I know, his hair colour is almost illegal.
You'll be gloating if NSW goes through eh?