I was wondering why no one had commented on Shane Watson still being fit. Then I realized that it's because Brett Lee has been fulfilling Watto's quota by picking up an injury every few months. So it's not really Watto's injuries that we find funny, any blond crooner with a guitar will do.

On a more serious note, which face did Ricky make when he learned about Brett's injury during a crucial series...yet again! (I stole this idea from Sidthegnomenator as is customary in this blog. I don't even wait for inspiration, just some good old fashioned 'plagiarism'.)

There is Ricky's ''pretend you are thinking while cussing Lee and his ancestors out" face. This comes up every time Lee is hit for a six. Or maybe he is actually humming a song by Six and Out. 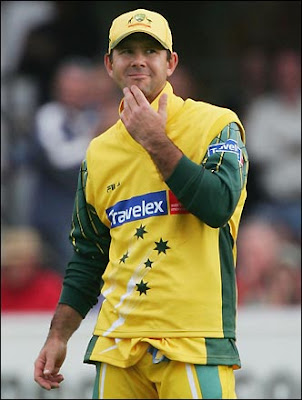 Then there is Ricky's "Binga, you are too old for this shit" face. Presumably used every time Lee pretties up his hair. 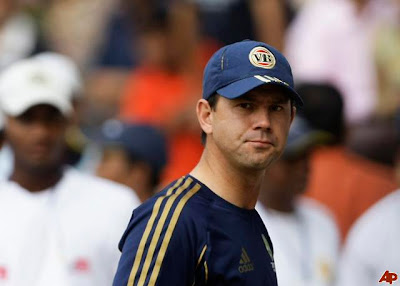 We also have Ricky's "I don't care because I have Witchy Mitchy" face. After some deliberation I have come to the conclusion it's because Binga flies on his own, while Mitchy flies with Ricky. 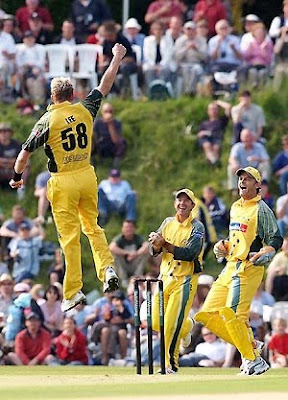 R Kelly would be proud 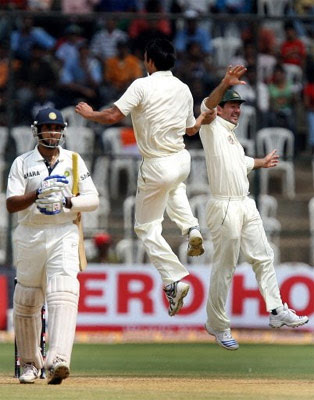 But Ricky still loves Mitch more
Finally, we have Ricky's "whatev" face. He has been hearing this story with Brett since last summer. He has to have perfected a check on his emotions by now! 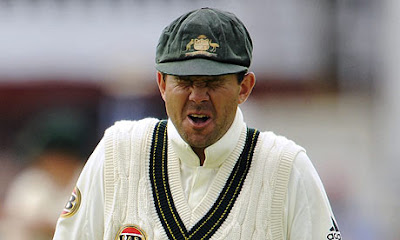 On the real serious note, is this really the cricket that's causing all these injuries? Lee has been playing/training non-stop since the beginning of the year. Every team is complaining about too much cricket. Then again, AB picked up an injury in the Champions Trophy and he hasn't played since April. Also, Ricky is just fine. And dare I say it...footballers play throughout the year without any significant breaks. They don't pick up injuries left and right!

I don't know what's going on. But just for personal satisfaction, I am going to blame it all on Lalit Modi. There, mystery solved.
Posted by Purna at 1:09 PM

There are some absolute gems of Punter out there - the guy is not known for his mild mannered behaviour. My favourite sits permanently on my blog, but I did like todays "thoughtful and remaining calm" tongue action look.

The only faces I prefer are those of Little Andy shaking his head in despair while Australia were beating them AGAIN (seems so long ago now ...) and that new pic of Graeme Swann I have put on my blog.

It was decorated by Brett Lee and sent me as a gift.

LOL. I am glad Brett is on par with our disdain for Swann. Little Andy will shake his head soon don't worry. And Punter should really take up acting with his range of faces.

I like the Watson theory, but I think we need to expand it a bit. He was actually a kind of voodoo doll for the rest of the team - he carried everyone else's injuries, not just Lee's. Clearly someone has revealed this to him and so now everyone else is catching up in the injury stakes. Either that or they're all as over the 7 ODI's in a row as the rest of us and are faking it to get home.

The Perth test doesn't start until mid december, so hopefully they will be back on track by then. In fact it starts on my Birthday and I'm from Perth, so that has to be a good sign right?

Missjane, I promise you I didn't do anything. But I will send them a threatening message if they don't recover before the Perth test for you.That should do it.
Aren't you glad Watto is not in the test team? I do think your faking it to go home theory holds some weight though.

Sid, its like the stars are all aligned for you ;).

Well, some positive signs there, thanks for the help girls... also some evidence in support of the 'faking it' theory: apparently Clarke and Lee could be playing for their state teams within the next couple of weeks. How convenient!

My concern with all the injuries is that Watson could end up back in the Test team! You may recall that I do actually like Watson, I just currently think he needs to accept that he is the Mr Glass of the team and stick to his modelling career. :)

Clarke's been planning his wedding and launching products during the 'injured' days I hear...how very convenient sounds about right.

He should get a place in the test sqaud Missy. When he realizes that five days on the field continuously is bad for the skin, he will willingly give up his spot to save his modelling career.