I've been waiting on this one for a long time. I dedicate this post to all Jacques haters. I know there are many of you.

I can sympathize. The man sits in the pavilion like a zombie the whole time. Then, the minute he enters the field with a bat, he makes everyone else around him look like brainless individuals. Sure, he is not exciting to watch but he is that guy. That guy that makes you want to shoot yourself even after you have taken wickets in quick succession. Because after all the celebrations, all the joys and all the mental images of the prize, you realize that Jacques Henry Kallis is still at the crease. And he is just getting started.

But wait, now that he has reinvented himself as a T20 player and is fabulous at it, you can't even call him boring anymore! Before I rub that in your face, did you really expect a player of Kallis' calibre to not step up to the challenge? I mean honestly, the best T20 batsmen are the ones that have dominated real cricket for eons. Jacques Kallis is one of them.

On top of that, the guy can bowl! He can take wickets and fuck with the minds of batsmen like any other bowler. That must really make you Jacques haters wish you had a thousand nails in your body instead.

It doesn't end there. He is one of those men who seem to land women that are out of his league, only in terms of looks of course. He is bald, has a tendency to inflate in size and has a creepy smile. Yet, somehow, his ex-girlfriend, no FIANCE, is a former Miss South Africa. Oh my, now the blood must really be boiling. 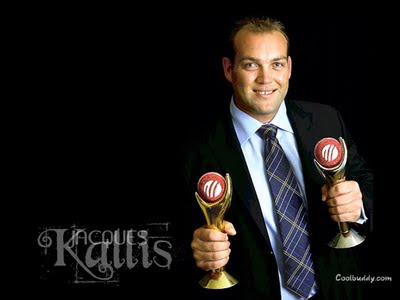 What's that? TWO trophies?
Haha. I'm done annoying you guys. Now I am going to make an earnest plea. Kallis is possibly one of the world's best cricketer and stands out in every format of the game. Only greats are able to achieve what he has. And he is only 34. Chances are he will be retiring soon and we will be sorry to find that all we are left with are phonies whose only skills are thrashing and smashing once in a while.

Send him a little love people. It's his birthday!
Posted by Purna at 11:31 PM

Hehe I forgot about it totally.. anyway Happy Birthday Jacques!

I really like Kallis. I am allowed to dislike Ponting for being an over achiever because he is my captain (and he's so smug about it) but what's not to like about Kallis?

People dislike him because apparently he is arrogant and has zero personality. I don't know him personally, so I can't say :P.
He has a foundation for kids that don't have the opportunities to pursue their cricketing dreams. He mentors these kids himself. How bad can he be?