Morne Morkel turns 25 today which is great, except for the fact that he is not in the team right now. Touted as a 'genuine pace bowler' by Allan Donald and chosen as South Africa's player of the year in 2008...and completely thrown out of the team by 2009! Lost his test side to his brother, Albertus, who has since performed like crap!

I prefer Morne. There I said it. I know Albertus is the 'match-winner', the T20 specialist and Morne is struggling to find his place amongst Steyn, Parnie, Ntini and Tsotsobe. But I firmly believe Morne is the future of South Africa's pace attack. I want them all to play, I really do. But Morne is a star and it's criminal to make him sit at home! Isn't Albie having a baby soon? He should be the one to sit at home and practice the miracle that is BOWLING while he is at it. I am sick of expecting Albertus to create magic with both the bat and ball and being let down each time. At least with Morras we only expect a good bowling spell, which he can do. Plus, the guy volunteered to be Santa Claus at the team's Christmas dinner in Australia. He gave them all presents! How can you keep Santa out?!

Anyway, the point of this post is, it's Morne's birthday and CSA should gift him a spot in the squad. And a purse. Apparently he needs one. 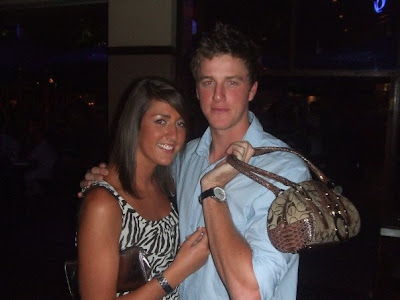 It's your birthday and you can do whatever you want!
Posted by Purna at 11:38 AM