My Dad the Comedian

My father is an Indian supporter. It would have been unfortunate expect for the never-ending hilarious rivalries we have, whenever India play South Africa. He is also wonderfully adept at making fun of the Blues when they are terrible. He has been out of the loop with cricket for a while, thanks to the North American lifestyle and the terrible cricket coverage. Thus, he was delighted to see the first India vs Australia game on TV and sat down to watch like an eager school boy. Till Ravindra Jadeja started bowling.

Dad: He is a spinner? Why isn't the ball spinning then? Has cricket evolved to the point where a spinner doesn't need to make the ball to spin anymore? He can't even spin the ball on an Indian pitch! He is bowling again! Why is he bowling again?

Me: Probably because Dhoni loves him.

Dad: Who is Dhoni?

Me: The Indian Captain.

I didn't know why Dhoni was the captain. So I started laughing, trying to explain to him that Dhoni actually had a good record. To which he replied,

Dad: So his record is going to win him this match? How lovely! Another flat ball! This Jadeja guy really is a true 'mystery spinner'!

Then the misfields started and his rants just kept on getting better.

Dad: All the fielders are lying flat on the ground but the ball still makes it to the boundary. I think the Indians don't realize that there is a reason people dive when the ball is racing. No one told them that diving after the ball has already passed is of no use. Know what Kumble used to do? He would make heroic dives with his legs wide apart, so the ball could continue to roll on through the gap. It was quite a show. But he had done his part, he dived!

I just had to find a picture of this. 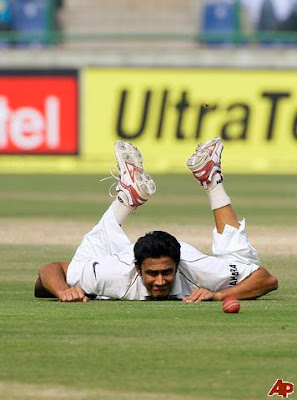 It's not the ideal picture but his legs are far apart and the ball seems to have evaded him. I laughed so hard. These are times when I have no qualms in admitting that my father is always right!
Posted by Purna at 3:25 AM

you must tell us what your dad said when bhajji was bowling... coz the fact is he made jadeja look better... :)

Well it is a joke watching indians field but Kumble is one of the better ones......seriously funny dad....

Well your dad must surely be impressed how the Indians fought back and surely PK might have made a good impression in him. Btw when did he last see a cricket match before this? (The Dhoni question made me ask this!!)

SP, he said 'tell me that's Jadeja in a turban!'

Chris, I enjoy watching them field. It's just so damn funny!

Adi, he was. But he put it down more as Oz not being the same team anymore. And I have no idea when he last watched a matched.