Then they decided Alastair Cook should be captain. 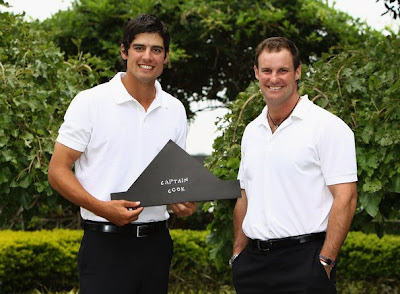 Oh I laughed so hard! Mascaraman can't even decide which shots to play to which ball but evidently he knows the game well enough to decide on field placings for five days.

Hello, England. He was captain in a four hours match remember? If I may be so bold to say so, it did not go very well. Or so we thought. You seem to have watched a different match.

Resting Strauss seems to give the impression that Bangladesh is not an important tour. I have written about it before and I was freaking angry...obviously. But never in my wildest dreams did I ever imagined that the ECB would actually fuck up as badly as making Mascaraman captain. Darlings, Shakib may be new, but he is far more intelligent than that Rimmel loving she-man. And we are not making Crashraful captain again. Because...umm..we have players with leadership qualities!

Whatever. They can use us as their lab if they want. We are not going to sit here and bring the house down with our words. England can send their F team for all we care. Just remember that we don't have pitches that will help Stuart Broad and our strength is our spinners.

Bangladesh may not win this, but if England think this is going to be easy, insects have been eating on their brain. The same insects then produced sticky webs to prevent the brain from functioning properly. And of course, their heads are still shoved up their backsides.
Posted by Purna at 3:34 AM

Purn, I agree Cooky doesn't appear to be a great choice as cap'n, and I'm undecided regarding Strauss resting, but who else would be captain? They've got to start developing someone - Collingwood is T20 captain I think, but I can't really see him as a Test captain either.

So assuming they couldn't have Strauss, who would you pick?

My argument is whether Strauss needs such a long break. He wont play the B'desh series, wont play against Pak in the mid-East, wont play the T20 wc, so the next game he plays for England will be in May!! wow.. just a break uh.. for results look at KP coming out of rest!

If it really has to be I would still have said Colly. Good luck @Bang, show them!
Wait a minute, after the Ashes someone said Broad was a prospect. Ummm. Imagine this, England are fielding and Babette has to decide when to review. *LULZ*

Hilarious if Broad was captain. We'd see all the toys off the balcony as well as his tanties on the pitch.

And his after-match speeches would consist of him saying 'I haven't done anything wrong.'

And his dad's after-match speeches would consist of 'he hasn't done anything wrong and never will.'

Main thing wrong with Mascaraman is that he is even duller than Andypandy if that is possible.

MJ (Mitchell Johnson is proud to share his initials with you), that is the funny part. England don't seem to have ANYBODY. I don't follow county cricket so I really don't know if they have anybody there. But I don't see anybody from the national team, which is just sad.

Mock, four months is long yes. But I would say he does need to rest. Being in the same change room babysitting Swann,Bell, Cook and Barbie cannot be easy!

Wes, Colly has the temparament, but I don't think he can project that out to his teammates. Broad is a prospect for everything it seems.

Lou,if Broad was captain all the players would have to wear a tiara after a match and watch Gossip Girl. I think Mascaraman would like that...

Yeah but Colly has already done it and they would respect him I reckon.

Lou,if Broad was captain all the players would have to wear a tiara after a match and watch Gossip Girl. I think Mascaraman would like that...

I guess if Tigers can hold to these English men during the series under mascaraman that would be the best justification to this decision :D

But Colly's not a very good captain.

Reverse, we can only hope.

I'm with Wes; we all know its inexplicable (because I keep damn well saying it is) but I do love Colly. Mascara man was shit before.

Colly for Captain. He didn't really get a decent chance before. He deserves another.

Colly doesn't like being captain. He looked as depressed as Rahul Dravid during the 20/20 World tourney and his form was h.o.r.r.i.b.l.e. Why make him suffer when he is the only one with what you might call an 'adaptable' game in the squad?

Because he is nice!
But, wait a minute, do we want an amiable English captain...
Okay. You've covinced me.

Good point, Lou and Wes - Graeme Swann for captain! We want an Englishman we love to hate.

Which Englishman do we like? Other than Buttniggle...and Jimmy (I am sorry but he is a fast bowler...)

Sid we can't pick Swann as he is a little attention whore and would just love to have that job. No favours to Swann!
Jimmy is good, from a Strauss (German "ostrich") to a monkey, this is a development I can support.