Daddy is a comedian again

I bring to you some more hilarious comments from my Dad. According to him,

-Umar Akmal ruined cricket by playing the shot that got him out when there was 1.5 days left.

-Mohammad Sami tried Umar's tactics to show Umar that what he did was stupid and wouldn't have worked in any way.

-Doug Bollinger looks like a tomato and is a disgrace to the handsome McGrath. He may be right. 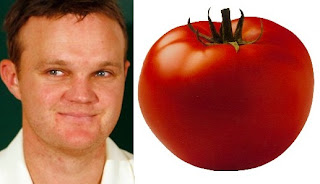 Poor Bolly, he does try. With the removal of Hilfy the looks quotient in the team has halved. There's only MJ on a good hair day left.

He does look like an apple.....or anything round for that matter....

Why do you guys all have cricket-mad parents. I am jealous.

it all runs in the family in the subcontinent :D

bollinger and tomato should be featured on cricinfo Page 2!!

Lou, surely Clarke and his pinched cheeks are somewhat attractive to ladies?

Adi, SHOULD I GO FOR IT?

what have you got to loose...may be it could get in for its sheer boldness!!

But don't I have to provide the description as well? Why the two are similar? I will have to think about that one...

@Clarke, yeah that's not impossible, sometimes the saturdaily pancakes are so great you get a crush on them.

may be you can have the effect where one picture fades into another!

it would be self explanatory

@Lou - The looks quotient is still 100% as far as I'm concerned, but I am only looking in one dierction.

@Purna - LOL on Bolly and the tomato. Spitting image.

Bah! It won't work. It specifically says cricketer who looks like a 'famous person'. The tomato, although slightly famous is hardly a person.

well we can find another famous person whose head looks like a tomato and mention it in the description to drive the point home!

I still maintain he has the Chucky look going on.

And Chucky is famous... kinda.

Oh yeah! Chucky...he is a little bastard though. Doug is nicer. Or he pretends to be.

LOL @Chucky. A bit Stan and Ollie is in him also.