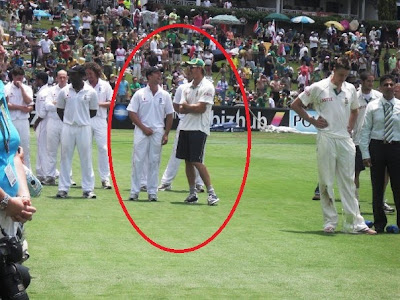 Trotty is celebrating with the Saffers again. Write him off with your pen! Traitorous Saffa!

I know I have made a lot of jokes about KP and Trotty being to chummy with their former countrymen but has anybody realized that they both were very, very subdued through the whole series? Specially KP, who made no runs AND misfielded horrendously throughout.

He misfielded thrice when a Protea batsman was about to reach some milestone. One of them was Jacques Kallis and the other two times it was Mark Boucher.

Those two are also KP's closest friends in the Saffa team. I know I sound like Michael Vaughan right now, but I have no book coming out and neither do I have any hair products to sell. Something is very wrong with KP. He did not look very interested in the cricket. Instead he made the same rueful face everytime he walked off cheaply. I've seen this face so many times I am beginning to think it's an act. 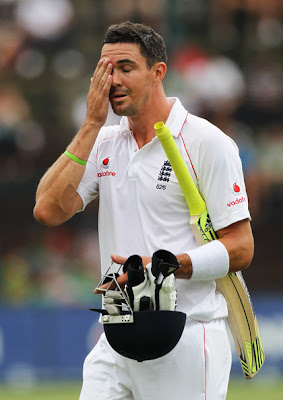 Not that I give a shit. The reject can go screw himself for all I care. But I'm just saying. The Queen might want to look into this.

I thought KP looked rather suspicious throughout the tour. You just may be on to something!!

I hope you're busy writing a masterpiece- Ode to the magnificent Saffa victory!! Can't wait!

It's definitely not a masterpiece! But it's up...and long!

I can imagine how much the fiasco with Peter Moores had an impact on him. Moreover, the stark realization that his good mates in the team, Flintoff and Harmison, distanced themeselves away from him must make him suspicious of anyone in the team...

I'd give KP a series or two and if he still seems to have that hunted look on his face when getting out, I'd release him of the agony of playing internatinal cricket and tell him to do what he wants!

I get this feeling he is going to kills my BD boys...

Hmm....perhaps that'll give me a very good reason to watch the series in addition to watching England possibly being given a good working-over!