Once upon a time there was a man name Mickey. 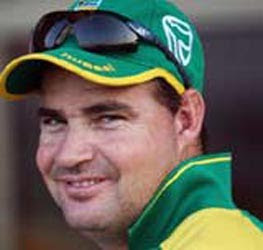 All Mickey wanted to do was find the love of his life. He went from places to places, year after year, looking for him. But he never came. Then one day he got offered a a job that required him to be in the same change room with 11 other men. Mickey was excited. Surely, he will find THE ONE amongst them? Hence, Mickey walked in to the change room the first day nervous and shaky. Upon entering he heard a voice say,

Even before he saw the face, the voice had bowled him over. Mickey was a nervous wreck by now. He knew, he knew that his time has come. 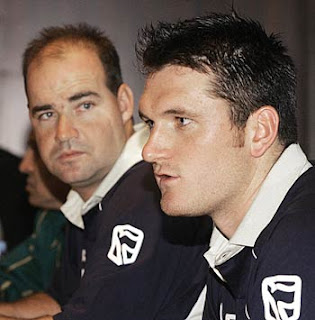 And thus Mickey happily accepted the job, spending his days looking at Biff. Giggling, laughing, jumping into the waters of Sydney for him...thinking Biff felt the same. Biff certainly pretended to. But there were dark forces around them. Dark forces that were using Biff to get their opinions across as they were not captaining the side, although both came very close. They just never wanted it officially. Takes too much time away from the hot girlfriend and the adoring fans on the official website. 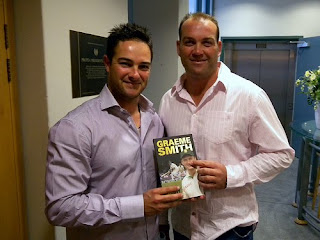 We have him wrapped around our fingers...

Poor Mickey was completely oblivious to the fact that even though he was coach, the national team was run by one Buffalo, one wicket keeper with dreamy eyes and one formerly fat man with a receding hairline. And that they latter two would turn his beloved against him. 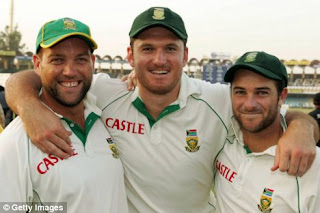 What else could Mickey have done? Biff ditched him at the mere hint of power and Jackiepoo and Bouchie are difficult to push over. As big as Mickey is. So before the tabloids found out about his failed love affair, he quit.

He blamed Biff in the process, but that was expected. It's a lover's spat after all.