Can Paul Harris turn a doorknob?

An important question, asked by a spectator at Newlands. Harris answered by taking Andrew Strauss out in the over.

"Yes fucker, I can turn a doorknob".

Go back to Durban. The doorknob swung Paul around and flung him to a corner, where he weeped like a little baby.

But also go back a little further to Centurion. He banged open the door without turning the doorknob. Again and again. Just went straight through it, till it broke.

This match, sometimes he banged and sometimes he turned. Neither got him the win. He was overplayed by at least two overs, when JP had been turning the doorknob much more smoother than him.

Yet, it is hard to criticize a man that continues to take wickets for the Saffers in the disguise of a spinner. I mean, he is a Saffa 'spinner' for fuck's sakes! What more did you expect from him?

Will he last? Probably not. Will he continue to mysteriously get wickets at the Wanderers? Maybe. Maybe not. It doesn't matter, because whether he gets wickets or not, he probably won't fucking learn how to spin the ball at the age of 31.

Does he need some love despite all of this?

Andre Nel seems to think so. 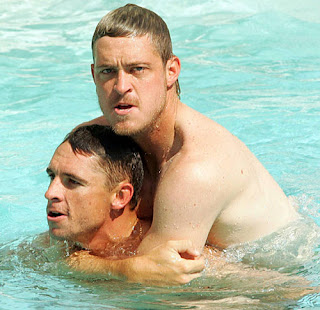 What do you expect. He's a Spinner.

I think Harris is gay along with the only known gay saffer Smith.

I like Paul Harris, but he bowled badly yesterday. Couldn't get his lengths right at all, so didn't exert any pressure and I had such hopes for him earlier in the series after his fivefer.

The English have given Ian Bell a lobotomy there is no other reason I can find for him playing like a real test cricketer.

Wes, HAHA. And I don't think Imran Tahir is going to play...Parny might. Depends on how much the Wanderers turns.

Vim, you always make me feel better with your theories :D. I like Paul too and I really hope he can keep it together for the next one.

That pic is somewhat disturbing... :(

And a little sweet? :P

Well these two people are not exactly of the sort that could make such a pic look sweet under certain rare circumstances... but I will not sit myself in the stinging nettles now. *lol*