I had a dream before tuning into the game today. I dreamt that South Africa won the toss and the Biff-headed individual decided to bat first, leading to a massacre of Saffa batsmen and a flurry of wickets. Little did I know that my subconscious was already watching the game and feeding me all sorts of wrong information. I think my subconscious may be English...BLASMEPHY!

Anyway, so if you don't want to have Dale's babies after that performance, you are demented...or think Stuart Broad is a bowler. The wicket I enjoyed the most was that of Andrew fucking Strauss. I also briefly contemplated having Amla's children after that catch, but the guy is married. So I will let him be.

Heartbreaker Morne got three, two of which were leg-before. Although one of them was probably a no ball. Barbie was 'astonished' and I think KP called the umpire an asshole. Daryl Harper's family better start saying a prayer for him, he might not be returning home from this tour.

Ryan McLaren replaced Paul Harris. Not a bad idea, but can Ryan McLaren bat? 'Cause Harro can you know...in his own awkward, "I always have a strange smile on my face" way.

Wayne also made his debut and was crap. Had he and Ryan not bowled, the Poms would have been out much sooner. But I grudgingly forgive them because they are debutants after all. However, here is a little something for them to 'grow' in the second innings: "Stick to the basics fuckers, the rest will happen on its own. Have you not watched the Poms bat?"

Prior, KP and Barbie have inspired many shitty kids who now believe they can be selected for the national team despite batting like a bunch of Under12s. Wait, I'm missing one. Oh yes! Fighter Colly Buttniggle. MUHAHAHAHAHAHA.

At this point, I must share with you a line I read somewhere (can't remember where) after the first test. "England only collapse once in every series. This was it and South Africa have failed to capitilize on it". So evidently, what we saw today and in the third test was not a collapse. It's just the English batsmen politely thanking the Saffers for their hospitability over the past few months. How very proper of them!

I am seriously happy with this day. No, the world is not ending. Dale Steyn on top form always gets that reaction from me. I want to share with you my happiness, hence this special picture: 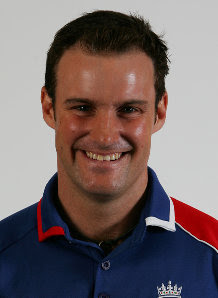 His smile is as horrifying as my happy face...


Of course Ashy P and his high score of 15 are still at the crease and this is a bowling pitch. So tomorrow all this may change. Unless Pee on the Ashes survives Jimmy like he did today.
Posted by Purna at 11:59 AM

Thank you so much brutal woman, that pic made me scream in terror o.O

At one point Ash had six times as many runs on the board as G-Smith. I thought my eyes are crumbling.

And John only bowled 3 overs, give him the obligatory 12 months to find his test feet and he will take back to back fivers. B)

I sincerely liked the grumpy look on Strauss' face when the so called no ball thingy was going on. He really shouldn't smile, he looks seriously dodgy.

Dale Steyn bowled absolutely beautifully last match and should have had Colly about 8 times in his spell after lunch on the last day.

But he was pretty damn fine today as well. He's back. He is so good to watch when he is bowling properly. Lovely jubbly.

I know I was being a little harsh on John. But it's in my nature!
There's something strange about his smile. It's like his mouth widens, but his jaws stay firmly in place. Quite disturbing.

Lou, did you see him laughing out loud and signalling not out when he first saw the replay? That was specially brilliant.
Lovely jubbly indeed.

Just means he don't no de rules any better than the whiny commentators on Sky.