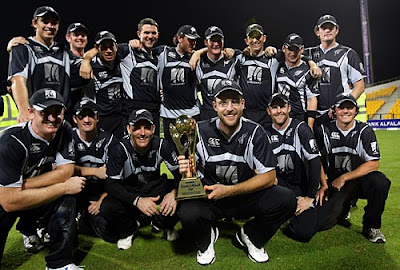 Look at them. The trophy fits in so well with their awesome uniforms. It also looks fitting in Dan's hands, but we already knew that. Why is Dan sitting in front of the others though? While he is easily the best Kiwi in the world by all standards, I find it kind of fucked that he is hogging the limelight. Specially when Baz was the Man of the Series. It's becoming a trend with cricketers. Take away their positions or drop them from the team and all of a sudden they start performing. You know I'm just grumbling because I never liked Baz in the first place and now he is making me eat my words. Hmph!

I am also grumbling because I wanted to write a long post about Pakistan not being able to play anything other than T20 again, but stupid Aamer's fightback was brilliant and now I can't make jokes about it.

No, I can still take a jab at Afridi. Afridi is a big blob of beautiful hair. That's all he is. Instead of brains, he has shampoo and conditioner bottles stuffed in his skull. The days he performs, science puts it down as an inexplicable mystery and classifies it under the X-files. The file is not that thick either. Mostly, it has complex mathematics trying to decipher how Afridi defied the concept of age by remaining seventeen for years.

Either that or, those people really need to buy a sense of humour. The Dubai Mall is the largest mall in the world by area. Just sayin.

That's what you get when you drop a bearded player. You lose. Period. The Headmaster of Hogwarts has a beard for Christ's sake! Oh that fella had one too. See where I am going with this?

Anon, I think they were being serious. They take this captaincy shit very seriously, just ask Younis Khan.

I don't see where you are going with this. Other than a mental asylum :P.

actually they treat it like 'astro-ill-logical' event which occurs when all the stars align perfectly in sky... :)

Purna, Dan is the only Kiwi God. He should not be in front of them, he should be on top of them.

Don't worry about the tattooed Baz experience teachs us he will be shit again fairly soon.

Sujith, how many years was he 17 for? three? four?

SP, lol. Good one. How does the Indian team interpret their losses..;)?

M, LOL. He is the Kiwi God isn't he? Let's just hope he can keep getting trophies for NZ. And thanks for the encouraging words on Baz. Made me feel better.

Rumour has it that the now famous movie was actually supposed to be called "The curious case of Shahid Afridi" , and it's a chronicle on his life.

SA , Fyi, is 16 now, and is excited to celebrate his "Sweet 16" in an MTv like manner, eating a few kababs with his homies.

It goes against all my Aussie-ness to say this, but I love Dan.

Trophys never look right against the Kiwi kit though.