Is that a good thing or a bad thing? On the one hand, he has been unable to control his run giving urges. On the other hand, he does pick up wickets regularly. And with the current SA bowling line up's wonderful ability to do everything but, Parnie might be the crucial missing link. Ryan McLaren is doing fine so far, but picking up the slack of Dale, Albie and Botha is difficult on your own. Also, I have no idea how McLaren will fare in the ODI's. Two games against Zimbabwe doesn't count for anything.

So Parnie needs to recover fast. I don't even know where his injury is...he sure doesn't look injured in these pictures. 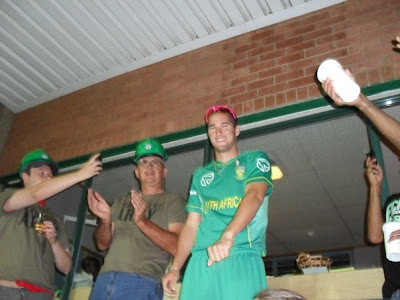 Parnie can't dance which is why he needs to return on the field...NOW! 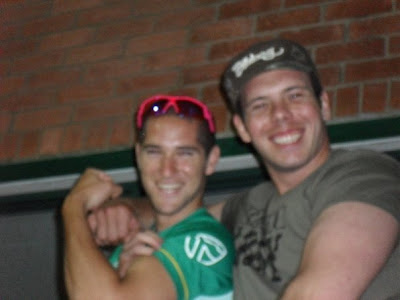 Gently! The boy needs his arm!
I just realized that I always complain when the boys are having fun. If I was a team manager, I would make a scary one wouldn't I? Make them march to the field, training in absolute silence, eating on my command, then chaining them up to their beds at night so that they can't escape. Not that they'd ever hire me! But what if this is exactly what the Saffers need? Something to think about.

In case I did get hired, I would wear this hard hat and headbutt anyone that opposes me. Cricket South Africa has a fabulous marketing team I must say. 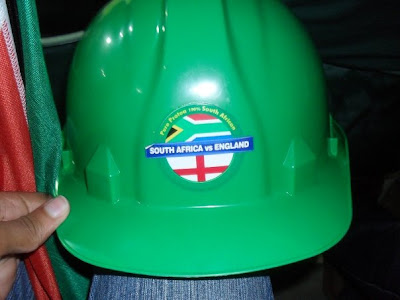 I would also give one to Kevin Pietersen, just because of that 100% South African line.
Posted by Purna at 11:50 AM

You'll make a great team manager Purna! A bit of hard work and dedication is just what our boys need..Btw Parnie has a sprained ankle according to csa, but he actually looked a bit drunk in the pics, it must be a new cure for the pain ;)

Sprained ankle and he is dancing? Now he really needs to be chained to his bed!
That new cure better be effective on his bowling as well!