Side effects of excessive twittering

Swannyg66, the recent champion of a tweet-off between him and JimmyAnderson9, has a wrist injury. It happened while they were training in the nets in Saffaland. I promise I had nothing to do with it. I wouldn't have messed with the chance of watching him get thrashed everywhere by the Saffers. 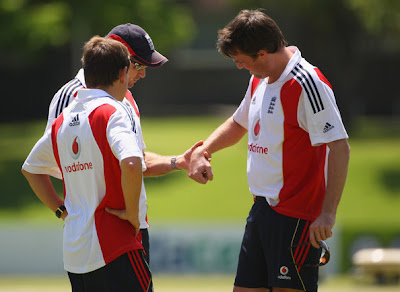 Allan Donald was also there at the practice, watching from afar. But he couldn't have injured him either because he was too busy trying to infiltrate the English camp by daintily holding a tea cup in his destructive hands. Being a spy is hard when you are as famous as Allan, specially amongst the English lads who were put to bed with horror stories of the fast bowling monster who would knock their heads off. But he did it anyway, for the Proteas. Such a country man! 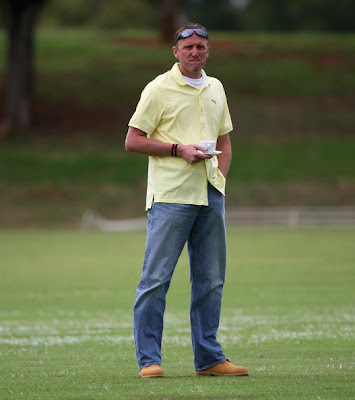 Then how did Swann get injured? He can't make the ball spin enough to pick up a wrist injury. So the only conclusion is Swann was so busy twittering on his phone, he didn't realize that he might also need his wrist for chucking. But I don't think he feels too bad about this. His primary identity is through Twitter after all.

Someone convince him to leave our favourite game alone and become a professional twitterer. For the sake of cricket.
Posted by Purna at 3:16 AM

Are you sure it's twittering? Methinks that Swann got a hold of Kirsten's "How to play better Cricket for Dummies" secret portfolio, wanted to implement it, but couldn't find the partner, and hence went solo :-)

Jimmy didn't help him out eh? But I hear the English don't engage in such naughty acts. That's what Strauss told us. So the storks in England must be really busy, delivering little ones.