Where is the Barmy Army? I thought they travelled far and wide to support their team and I am sure a few of them have reached Saffaland. I saw them waving their flags. Unless they were relatives of Trott, KP, Strauss, Prior...oh fuck it! Need we go over the list again and again? Relatives of the Poms. There, that covers it.

I want them there, I need them there. To boo Dale. Boo him till his shittiness is drilled into his head. Why? Because of Mitchell Johnson at the Ashes that's why.

He got written about, booed at, made fun of, abused at Lords. After which he was fanfuckingtastic in the fourth test. He wanted to shut the world up and the Barmy Army instigated that. They were there in SA's tour of England last year, where Dale ripped through the Poms batting. It may have also been because he was in form then, but I firmly believe the Army helped.

I want the Barmy Army to call Dale a chipmunk with peanut brains.
I want them to tell Dale his grand kids have disowned him.
I want them to dress up as Dave Warner in a bunny costume and imply that the only reason Dale takes his wicket is because he has an amorous relationship with him.
Then I want to watch Dale do this: 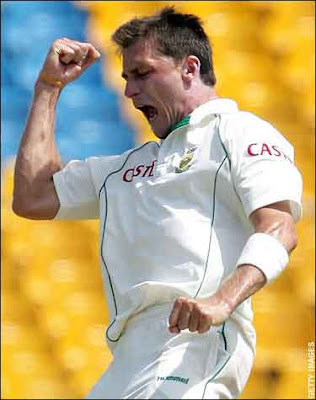 So come on Barmy Army! Put your thinking caps on and boo Dale! Chop chop!
Posted by Purna at 4:13 AM

The Barmy Army are still in England, making their Ricky Ponting masks for next year's Ashes tests. They're not very smart, it will take them a while.

Or perhaps they couldn't get day leave from their open prisons to visit South Africa?

Nah, more likely any Barmy Army absence is because they are watching the DVDs of this year's Ashes triumph.

Whoa! We got a pre-Ashes battle going on here. How many more days till the Ashes go home Sid?

Sarah, Sid lives in England so you can gift her a copy for Christmas.