Distressingly, I did not get to watch Mascaraman as captain while England was fielding and the highlights are not up yet. But I did get to watch the post-match presentation and he was too busy blushing, smiling and batting his eyelashes at Kass Naidoo to give a coherent answer. If you don't know what she looks like, click on that link. She's hot. Taken, but hot.

So Mascaraman as captain got properly fucked today. Loots Bosman and thankfully Graeme Smith (I say thankfully because he seems to be becoming consistent with the bat again..about time!) smashed the Poms till they begged for 'no more'. Adil Rashid and Kevin Pietersen, unable to let their Mascaraman go through this torture alone, volunteered to take a bit of the hammering.Even Joe Denly got to make his bowling debut. He broke the record tumbling partnership between Bosman and Smith but god damn, this is like the wicket-keeper giving his gloves to someone else to come bowl. Hmm, where have I seen that before?

England lied, they lied big time. Before today's match the headlines were all about how the Poms were going for their first trophy of the series. You are telling me they REALLY thought that the way to go about that was to make Mascaraman captain and send KP instead of Morgan when Cook fell and the run rate was like 15? Nope. They never wanted to win. They lied. What are they teaching their kids?

Speaking of Cook batting, is it just me or does he never look settled even after hitting a couple of boundaries? What a funny fucker! Kepler Wessels said it best. Mascaraman was on fire, hitting fours every delivery and Wessels goes like "He's not considered very good at the shorter form of the game, Alastair Cook". I know one person who clapped in glee at this comment-Jimmy Anderson, who was also trying to show his captaincy skills as per photographic evidence: 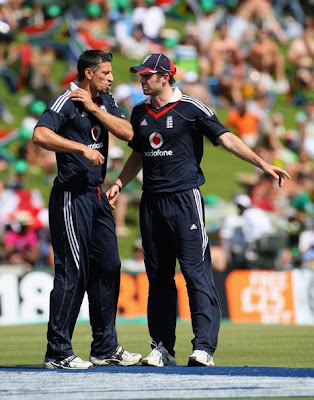 Mascaraman is a little bitch! I am the next captain of England! 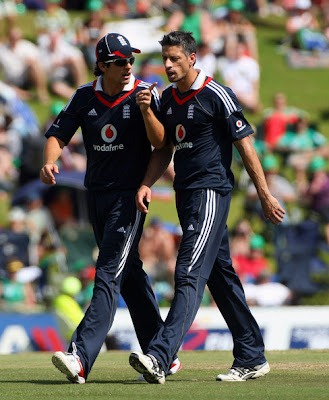 I will introduce you to Kate Moss, don't listen to Jimmy 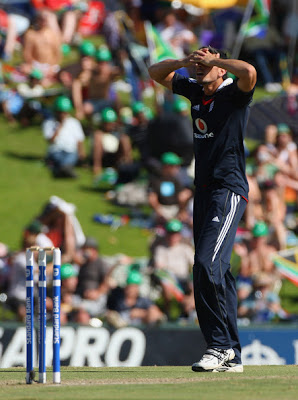 But I want to be captain too!

How wildly entertaining the Poms are. But KP and his switch hit was the funniest shit ever. KP jumping like some 1930's bad action hero and watching the ball hit the stumps. I couldn't find a picture of the exact moment, but this will do nicely. 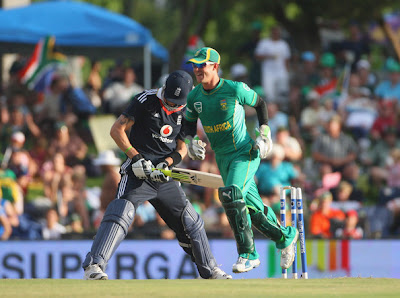 In case you didn't know, his wicket was picked up by my soon-to-be-adopted son ROFL. I am still working on the adoption papers.

I love an English humiliation. Specially when the Saffa boys are all brilliant. I am so relieved that Dale and Albie (yes ALBIE!) picked up wickets. Although they continue to look disinterested in getting wickets during the middle overs. And I seem to have jinxed Duminy with my 'year of JP' talk. Feck!
Posted by Purna at 2:26 PM

What a great day I stopped studying to watch the game and it paid off..pity that the pant-wetting spinner wan't playing, I'd love to see Smith and Bosman hammering him all around the park! Btw Anderson is really plotting behind our hero's back, you can sense how much he's sulking!

I too was sad that Swann didn't play. Apparently he is stiff. They complain about everything.

We have to stop Anderson Gabrielle. Mascaraman must be captain FOREVER. You with me?

Absolutely, Mascaraman is the 12th Saffer on the field, he has no clue on how to captain a team :)

Gabi, did you hear Wessels say "this is a domestic game" when KP and Trott were playing? The other commentator (possibly English) was all "you really want to go there?". It was hilarious!

Yes, it was the icing on the cake! For a pretty long time all the 15 people on the field were South African, Wessels and Cullinan during the commentary were trying hard not to laugh..priceless afternoon!