For whining. They are going on and on about how the Saffa crowd is going to stick it to KP and Trott. Flower Power Andy and dipshit Andy fears Trott will get the same treatment that KP got five years ago.

For fuck's sakes! KP is a reject who pretended he was too good for SA and kissed every god damn English behind to prove his Britishness. That is just asking to be made fun of. Trott never denied his Saffer roots, not that I know of. It doesn't mean people won't jeer at him, they will, because it's called SUPPORTING YOUR TEAM. And it's part of cricket. Happens at every fucking game. Most cricketers just man up and take it. But the Pommies are a big bunch of whiny morons who need their mommies to protect them from the big bad Saffa world. They are making such a fuss about it that AB de Villiers had to say something on behalf of his people:

If you thought there's an overuse of the word 'obviously' in this answer, he uses it six times in the whole interview. Which is totally random and has nothing to do with booing the Poms but I thought I'd just point out that AB has flaws, so you can like him again!

Methinks the English are making such a big deal about it even before it has happened so CSA is forced to do something in case it gets out of hand. Fuckers are determined to ruin the fun for all spectators. As if their mediocre batting, bowling and horrendous fielding wasn't bad enough.

Okay fine, they won't boo you. They will shower you with praises and kisses. They will even use special lip gloss so that the kisses have a pleasant smell and make Wayne Parnell the brand ambassador of this gesture. 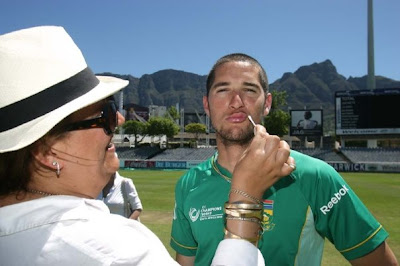 Happy? Now shut the fuck up and play some cricket. Or whatever you think cricket is.
Posted by Purna at 5:48 PM

Don't worry, KP will be having a hard hard time. And it should be a easy win considering that only Strauss, Broad, and Swann know how to play cricket.

My time at castrol cricket with Harsha Bhogle.
Cheers;

God, have they started whinging already? They don't mess about, do they? Just kick their arses and they should shut the h**l up pretty quick.

Poms are so Stupid! Making a fool outta themselves by being such cry babies! just kill them when they come to SA, Saffas! Let these irriating weeds be finished for once and for all!!

They really are a bunch of whiny babies. What the eff are they worried about?

Punter got booed through the Ashes. In fact, the crowds at Lords were booing Punter while he was making the speech after the Lord's test. Didn't notice any of the English players or admin coming out and condemning this.

If Trott does get the raspberry, the hypocrisy in the press in England will be unbearable.

Chris, I don't know why you would add Broad and Swann to that list :P.

Sid, did you expect anything else from them?

Vim, didn't the ECB ask them not to boo Ricky? Whatever, at least the Aussies didn't whine about it. Do you live in England? In which case, I am sorry you have to read that crap.