I see all these pictures of the Brits jumping inside tires and covering themselves in dirt. While these are all clever ways to hide from the Proteas, they also have the added advantage of helping them with their training. So naturally, I went hunting for latest pictures of the Saffa boys expecting to find them overcoming obstacle courses in water or something. Instead, I found the following pictures, which I can only put down as the Saffers trying something unconventional for a change. What with all the accusations of them being a robotic, one dimensional team and all.

1. The art of sledging 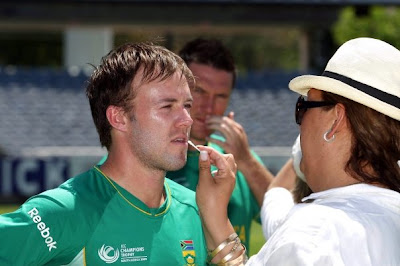 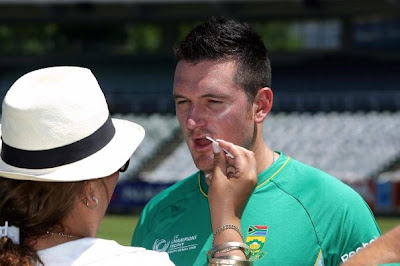 Pumped by the whiny English, the Saffers are putting special efforts into sledging this series. The thing that they are applying on their lips will keep them extra moist throughout the day and seep into their brains to inspire them. They might come up with some gems, but I think pointing at every English players' butts and laughing at them will be sufficient. 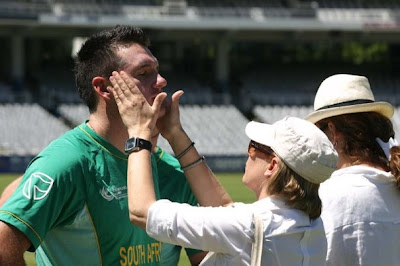 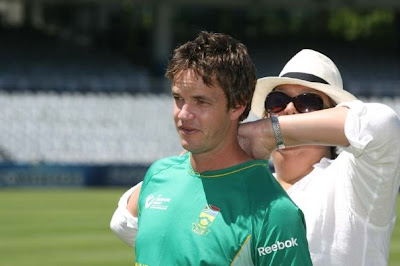 Apparently, sex is not for the Poms, as revealed by Strauss' reaction to Kirsten's dossier. But Graeme Swann's constant pant wetting says otherwise. It could be that they are in denial of the dossier because they are simply not getting any. So the Saffers are going to have a woman rub them in odd places to rile the Poms up. What brilliance! 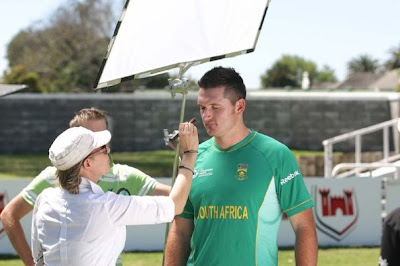 Since nothing else has worked so far and the Buffalo's unimaginative captaincy has been one of South Africa's weaknesses as of late, CSA has resorted to publicly humiliating Biff by putting makeup on him. Every time he refuses to use his brain this picture will flash on the screen. If this doesn't work, maybe Botha can finally be captain.

Okay, I can't be in denial anymore. What the fuck is going on? I only see some stories on Dale, Hashim and Biff playing for their club sides. They are doing awesome but that's not the point. According to Biff's twitter page the team only met yesterday to practice together. And Jakes, JP and Parnie are all injured. WHAT! The first game is six days away. SIX DAYS! Who injured them? I am going to smash their heads in and then put them in the room where Swann keeps his wet pants.

I am having a heart attack.
Posted by Purna at 1:45 PM