I did die. Then I thought, if I died who would stand by South Africa? So I came back. Yes, I still stand by them. What did you think? Just because I left NZ and SL when they started losing I'd do the same to my Saffa boys? I've been standing by them for 16 years now....such scenarios are nothing new to Saffa fans. They lose, we cuss, we move on. Another tournament comes by and we get behind them again. Even if I am 100 by the time SA actually win an ICC trophy, I'll fucking blog to rub it all over your faces. Proteas fans have grit and nothing you come up with will faze us.

They lost because the bowling was even more horrendous than any nation's fourth stringers. Dale needs to be boxed till he is black and blue. One good season, one trophy and the fucker forgets how to bowl. Allan Donald is ashamed of you Dale. He told me so.

Let's not even mention Albertus. He should just run straight towards the boundary with the ball in his hands from now on. That's where it's going to end up anyway. I wasn't impressed with his batting either because once again, the ass got run out at a crucial moment. Although, in retrospect it did look like he was trying to get Smith off the strike because he was cramping and couldn't run. CRAMPING AND COULDN'T RUN, STRAUSS. He is the biggest motherfucker on Earth. He knew if Smith had a runner SA would have at least edged SL out of the tournament. He is such a coward that he even blamed the Umps for it. I saw the incident live. The umpires asked him several times and Strauss nodded his head 'no' every time. You don't even have the guts to admit it was you, you wanker. But I don't wish him ill. I don't wish him ill at all. I'll just wait for karma to hit. Then I'll kick him. 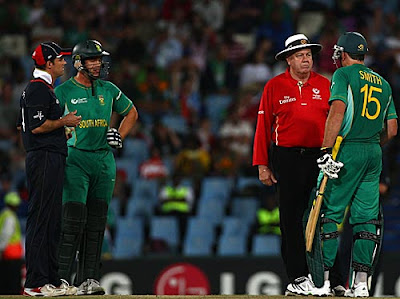 Cricinfo: Graeme Smith asked for a runner and Strauss didn't allow him one
The batting was equally miserable, other than Smith. Don't be shocked. I have nothing against Smith the batsman. We always knew he was brilliant and we expect nothing less than what he displayed at the game. Smith the captain is another story. The story being defensive field settings in the middle overs when the bowlers are already bowling atrociously, allowing the opponents to pile on runs.

My Herschelle failed.
My Kallis failed.
My Boucher failed.
Even my ROFL failed.

I don't understand how the burdens of past failures don't motivate Gibbs, Kallis and Bouch to fight like hell in ICC tournaments. And what the fuck happened to Jakes? He had bowling figures of 3-0-14-1. Then he decided he couldn't bowl anymore. Gibbs and Bouch looked like they weren't even trying. I'm reaching SA tomorrow to give Gibbs a hair transplant, fill the gap in Kallis' front teeth and tell Boucher his website sucks. Maybe that will hurt them enough to fucking react!

I am incapable of hating on ROFL as I am hoping to be his adoptive mother. But I'll tell you about that another day.

That Morgan guy can bat. It physically hurts me to say anything good about England. But I still made an effort. And that is all you are going to get from me.
Posted by Purna at 12:48 AM

At one point I thought Smith should bowl a couple of overs (I can't believe I just said that), Albie was very expensive.

i think strauss was fair on the runner issue. i'd do the same. if he can score 140, he can do without a runner.

To be honest if Smith came to me begging for a runner, I'd laugh at the fat bastard & tell him to run harder. He ain't that slim yet!

Bon, the bowlers need to be straightened out. They were South Africa's main weapon last season. What a dramatic change!

ShadHu, he would have scored much more had he not been distracted by his pain. I know as professional sportsmen they are supposed to get over these but this was a crucial match and Smith's innings was an important one. Strauss wasn't fair, he was sneaky.

Es, his weight is a mystery. Of course he wouldn't have cramped in the first place had he been more fit in the past one year.