This one's emotional. I can't help it. He was my hero and I was shattered when he admitted to the match-fixing allegations. But his death was even more painful. Sometimes, I still can't believe that one of the greatest South African captains ever, is no more.

You might hate him and accuse him of bringing cricket down to a low from which it still hasn't recovered. But you can't deny his captaincy skills. Hansie was a leader. A leader that played a huge part in pulling a nation out of a great tragedy. The apartheid was fresh in their minds when SA re-entered international cricket. Hansie and his men were partly responsible for re-kindling their love for South Africa again. It remains one of cricket's greatest achievements.

Hansie Cronje was also a solid support system for players like Pollock, Gibbs and Kallis...all of whom went on to become South African cricket greats. The South African line up of Cronje, Rhodes, Kirsten, Cullinan, Donald, Pollock, Kallis, Gibbs, Symcox, Boucher, Klusener etc. still sends chills down my spine. What a team! Despite their failures and their 'choking', they always remained the team to beat.

I miss him immensely. Graeme Smith may be a good captain at times, but I doubt he will ever be able to ignite the passion that Hansie could in his men. He had fire and courage, even in his worst days.

I don't know how current South African players look at his contribution to cricket. But I hope he is not forgotten and I really hope that amidst all the match-fixing talk, Saffers take out a few minutes on his birthday to remember their fallen hero. 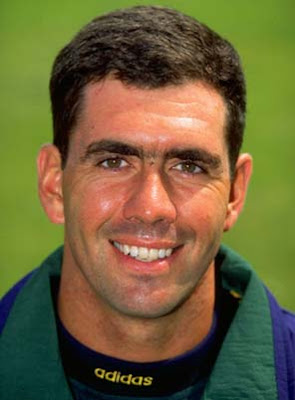 Hansie was a legend. He was the best cricketing captain the world would ever see.

Aah KK, you ARE my twin!

Bon, I was very interested to know how Saffers feel about him today. Do you still like him?

I'm a South African and I have forgiven him. He was the best. Just look at what we have today, I mean Graeme is making Hansie look like an angel. I think there is some mixed feelings about Hansie but I think that the majority forgave him.

It was sad. It's amazing, and sometimes forgotten, how young he was, just 32.

There were a lot more people involved in this and I think he was a bit harshly punished. It was bad what he did but people should always be given a chance to change.

Gert, that's great to know. Graeme really is a disgrace. He has none of the eloquence, dignity and intelligence that Hansie did.

Aah Stani, where have you been? Yes he did take the bullet for a lot of people. Just one example of his courage.

I dont know. Match fixing would always haunt his image and undo all his good work on the field.

It still bothers me to believe why he did that what he did. he was famous, he was noble and he was a very good skipper.

why did he do that!!

I know what you mean Sameer. I wish I knew why he did that. But his death puts everything in perspective. I wish we hadn't let him take all the blame. You know he took it so other people would get off lightly right? I'm not saying that he didn't do a lot of the things, but he also protected people. That makes me sad.

There is a movie out about his life.
http://www.hansiemovie.com/

"How do you start over once you've betrayed a nation's trust?" -It says a lot.

Sadly I haven't seen it yet. Hansie's brother produced it and I think he tried to win back the nation. I like giving people second chances and I love come backs. People forgave Gibbs so I am sure they forgave him.

Back in those days the cricket players weren't getting payed enough, they were being over shadowed by the rugby players. But at the end of the day he still had a choice and he still did it.

When I saw Strauss yersterday calling back Mathews I thought about Hansie. He would have done the same. I remember when a batsman lost his footing and tripped in the middle of the pitch. Hansie had the ball, ran to the stumps and pretended to stump him, but didn't.

Today I think the SA public will remember him as a great captain and cricketer. Let bygones be bygones.

he made me support South Africa whenever they play against Australia! :)
well said he has inspired a whole generation of cricketers and lead the team really well

i read somewhere he had led the team to victory in 99 of the 138 odi's he captained! the record speaks for itself!

hopefully people forgive him and may his soul Rest In Peace!

Bon, I wanna see that movie so badly now! I'm gonna go look for a Dvd.

I am so thrilled you guys all agree with me. It's good to see the positive thoughts for him :).