Australia play Pakistan in four hours in hopes of qualifying for the semis.

India play West Indies in nine hours in hopes of qualifying for the semis.

The Champions Trophy has already given cricket lovers a lot of drama, fun times, surprises and heart breaks. Just when we thought it couldn't give anymore, it comes up with another one:

Indians hoping for a Pakistani win. Not just a win, a demolition of the Aussies.

Screw Heroes and Grey's Anatomy. The Champions Trophy is the next prime time hit. It even comes with a US$4 million ending and a shiny trophy. Oh, and a sleek jacket with Jonty Rhodes' BO on it. 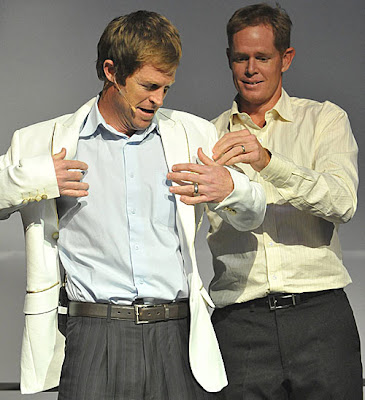 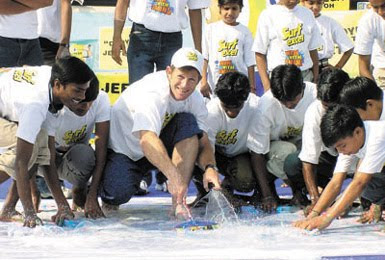 He has helpers to clean him

Just in case you are interested, I am hoping Australia win or have a good enough net run rate and India crash out. The logic is simple. If Australia win, they top the group and play England in the semis. The Aussies are still pissed about the Ashes so they will clobber England. If Australia is second place, then the Poms play Pakistan. That way if Pakistan have a brain freeze all of a sudden and lose, the Aussies will still meet the Poms in the final (the Kiwis have fulfilled their quota...sigh!) and clobber England. Australia better hold it together because England CANNOT win two trophies in the same year. It makes cricket look bad. Which might happen if India pull through.

The real question is however, who will Tifosi Guy support? His team or his country? Oh the things life throw at you!
Posted by Purna at 11:17 PM

It is impossible for me to cheer Aus on. Sorry Purna, but Pakistan will win.

Bon, they can win, as long as the Aussie net run rate is better than India's. :D

Did you refund your tickets for the rest of the games?

Well it's me against Stani tonight. We've opted for opposite ends of the couch & childish taunts.

Ponder this: how is Mike Hussey's ICC ODI ranking 6?

...she's kidding of course. Cricket will never come between you and me Es. You can have the World Cups and Champions Trophy, as you are the ultimate prize ;o)

Es, your side of the couch won. Celebrate.
The ICC ODI rankings went to sleep when Hussey was flat-lining.
On a more serious note, maybe its because Australia is one of the few teams playing ODI's in the past few months? The others were England, India, Sri Lanka and New Zealand. So it's a possibility.

Bon, wave at the camera or something. We'll be watching on our miserable online links that barely work :(.

Didn't see a response to my earlier comment, so I guessed you chickened out of the arguement !

Mate, since 1992, there has ONLY been one team that I want to see winning and that is Australia. It doesn't matter if Aus plays India. It's always Aus for me. Heck I've been to Chepauk in 1998 and rooted for Aus.

Oh and if you wonder where Chepauk is, it's the cricket stadium in Chennai, my home town.

Purn,
How can you say that cricket comes before Esra Star?

Tifosi, good arvo mate! Yeh, that Purna always chickens out of arguments, especially funny ones cos her jokes are drier than a dead dingo's donger not to mention her having a few kangaroos loose in the top paddock.

I see Tifosi spells 'I so fit' backwards. You better watch out if that's true! Purn will come after ya!

'Av a good one, I'm gonna go throw another shrimp on the barbie. Strewth!

TG, I didn't know what to argue about as you were merely stating your pain and your beliefs. Psychiatrist don't argue, they listen :).
Oh, and I smoke grinded cricket balls. What do you smoke?
(SA was also the team to beat, even your Aussie boys admitted it. Ask Ricky)

Stani, aren't you happy you have a fellow Purna-hater? Thank god. I was getting worried that you were beginning to like me. You have gone soft Stani. Maybe you can take some tips from TG.

Stani, are you worn out from your Australianism display? Very impressive, yet also highly embarrasing.

Es, that was Australian? You must never admit to knowing Stani.

That's sterotypical Australian. Seeing as Stani married me he sometimes likes to fit in. Just like I put on a fake british accent run around asking "innit? innit? innit?"

LOL. I can just see your kids playing for the Aussie team using your passport as proof.