I really do. The Windies are not that badly off without the arrogant bastard, you know. Their batting has been miserable since Lara left...possibly even before Lara left. So you can't really blame the second stringers for that. It's Lara's fault for not teaching the youngsters. Hate me all you want, but Brian Lara was technically the leader of West Indies batting and it was his responsibility to make sure at least some of the batsmen could fill the void. You can't replace Lara with one person, but several would have been good enough. Which he didn't. And now every time the former world champions bat, we want to take the t.v and smash it over our heads.

No Chris Gayle's batting doesn't excite me. He is a prick who doesn't give a shit about his team. All he wants is glory and fame for himself. And I fucking hate glory-hunters. Also, the man wears too many shades. People with shades have something to hide. Like, where they are REALLY looking. It's very dodgy. 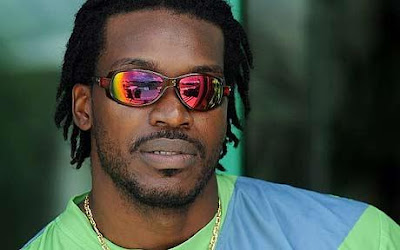 I...HATE...YOU
Plus, the Windies seem to be doing alright. Don't pull out their win-loss ratio since the contract controversy, it's not different from what it used to be anyway. Their pace attack has caught everybody's attention. Kemar Roach is delightful to watch! Not to mention Tonge. Yes, I used the word delightful. If you saw them bowl, you would agree. Add these two to Edwards, Powell, Taylor and Bravo and you have one hell of a bowling attack. That might be a wee bit of an exaggeration but hey, they are young and competitive. They have the potential to get there.

The batting may still have some hope with Sammy and Smith but the captaincy needs a radical change. I admire Reifer for having the courage to lead this broken side, but he is no captain. Then again, at least he cares about the game and is grateful for the opportunities, unlike the loathsome Gayle.

So I say keep Gayle the Whale out of cricket. Forever.
Posted by Purna at 3:13 PM

He won't be back anyway. He's going FreddyFreelance so you'll only see him in the IPL. Now who watches that anyway?

You're wrong to blame Lara. The guy used to carry that team single handedly. He's totally different to Gayle. Maybe you're slightly too young to remember Lara's era but I felt sorry for that guy. West Indian cricket was more bad for him than he was bad for West Indian cricket. Put him in a top side and we'd have been talking about the greatest batsman ever.

Seriously? He announced it? Where? This is turning out to be the best year ever! First no Freddie, now no Gayle! YAY!

I'm not comparing Lara to Gayle. He did a lot for WI cricket...but why didn't he think of what's going to happen to them when he leaves? Have you seen the other batsmen? They are pathetic. Not even a promising one around.
He is still the greatest batsman ever. And I am not too young to remember Lara's era, Grandpa :P.

Me too......I hate dhim ever since his comments against test cricket.....

Chris, isn't he the most obnoxious player ever? Who does he think he is?

Why do you keep disappearing Chris? Are you some sort of a double agent?

As a West Indian, I can tell you Lara tried to do a lot with these batsmen. But he couldn't very well hit them over the head and tell them to think about what they're doing and not bat shit. A lot of the work came during the domestic season, which the cricketing world could hardly care about. It's not Lara's fault at all.

Yes, Stani, we all felt sorry for Lara. When he didnt make a decent score, it was an automatic win to the opposition.

Keep up the good work, Purna!!

Reisa if that's what it took, I wish he had hit them. Whatever was required. I'm serious. I mean, this is the same country that produced Brian Lara. How is the WIBC not embarrassed about their batsmen? I feel embarrassed for them!

It was an automatic win for the opposition even when he made a decent score! He was the most unsupported man in cricket ever!

Your blog keeps getting better and better! Your older articles are not as good as newer ones you have a lot more creativity and originality now keep it up!

Thanks Anon. I don't know about the originality part but I appreciate the constructive criticism.