Black Caps in the semis?

And now they have a chance to do it again. The Kiwis did what Sri Lanka or South Africa couldn't do. Murder England. The Pommies made 146, and the Kiwis have to make 139 to qualify for the semis. Don't you love it when you wish for something and it finally comes true? Well, I shouldn't be too happy yet. The Kiwis still have to bat and its a tough pitch apparently.

This next bit might shock you, so sit down. Dan bowled only 1.1 overs, conceded 2 runs and got 1 wicket. I know what you are thinking and it is correct. Elliot, 007, Butler and Mills got the rest of the wickets. That's four out of five Kiwi bowlers, minus Dan. Did you hurt yourself from the fall? I told you to sit down for this. Even Dan did. 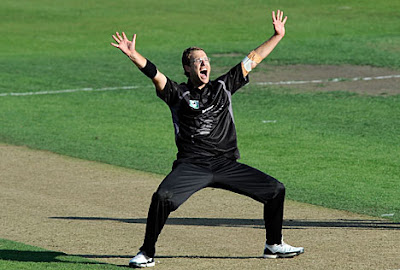 My lovelies can bowl!
So what is the Kiwi secret? They are always the Underdogs. Even when they are playing fantabulously nobody takes them seriously. While everybody's involved in an over-the-top, highly dramatic struggle, the Black Caps just quietly slip out, take the spot and run! Till they reach the semis. Then they crash out.

Interestingly, it's been nine years since the Kiwis won an ICC tournament, despite having reached the final four a number of times. Sounds like a certain team in green...see? They are so clever that nobody even realized that they consistently fail at the same stage as the Saffers. I like. I like a lot.
Posted by Purna at 12:19 PM

Aren't we proud that we are finally supporting a winning team ;)
Dan is one clever captain.

Bon, it really does feel good!

KK, can you finally face the world now?

Stani, he will live through that asteroid. Don't you worry about that :P.

nz and eng qualifies to be in semis... look what cricket has come to... :)

Well who would have predicted England and New Zealand going through from this group with Sri Lanka and South Africa crashing out ? I suspect not many!

There was cricket while Mandela was still in prison.

Bats, I know. This tournament is awesome!

Leg, LOL. That's good to know. I am not of that era ;), so I didn't know and my research for some strange reason didn't tell me. Must take it up with google.:D