A cure for depression

The ODI's between Australia and England. If you are not watching it, you should. It will bring a lot of joy in your life.

The Pommies were actually offered a contract with a traveling circus called the English Clown Board. We got a great demonstration of how good they are at their job today. Strauss, the head clown, lead they way by making sure that the first over of a One Day International match was a maiden. He then got a little serious with the batting so Bopara, the Bollywood clown, tried to run himself out. But they had underestimated the comedic power of the Yellow Convicts (YC). Goldilocks, a prominent joke machine, fulfilled his duties and duly missed the stumps while Bopara dived heard-first. The YC's did well to continue the entertainment when the Clowns got too serious again (after making sure that they had lost two wickets of course), with three players running after one ball that still made it to the boundary. 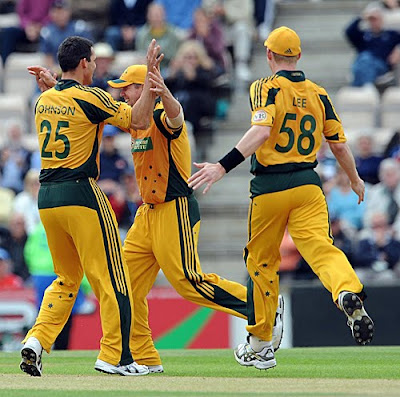 Look mommy, I am funny!

The highlight of the act came with Wato, the buttery-limbed convict, yelling out 'YEAH SEXYYY' when Goldilocks actually managed to keep the ball in his two hands to dismiss Colly, the sad clown. The YC's haven't been allowed to be with their women for a long time as punishment for losing the Ashes. Hence, they have forgotten what sexy really means. Or maybe they have been seeing too much of Bingle lately.

Many amusing wickets and one miserably funny power play later, it was the YC's turn to chase. Just when we thought it couldn't get more hilarious, they proved us wrong. YC's batting began at such a slow pace that even the turtle gave up his trophy. There were many moments in between the painful trudging though. Sidebottom, brother of the legendary Krusty, worked very hard on his inadequate bowling and got rewarded when one of his useless balls hit White, the Albino convict, in the nuts. White took revenge by scoring a strapping 105 from 124 balls. It went down in history as the most boring 124 balls every played.

'Spinner' Swann, simply titled the Clown, trumped YC's disgusting fielding all by himself when he dived for a ball and nudged it towards the boundary with his head. He then laughed at the replays to show how confident he was while making fun of himself. The Clown scouts had come to see the game you see.

The YC's won...but not before making sure they needed a run a ball to overtake the Clowns' daunting 228.
Ex-convicts Hayden and Gilly's thrashing, thumping approach to cricket was successfully flushed down the toilet today. You can find it in your sewage system. 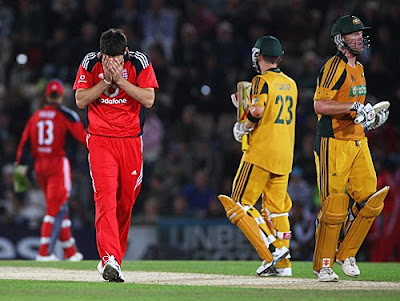 The Clowns dropped two catches, missed three run outs and will continue to do so...oh the tears of joy!
Posted by Purna at 4:00 AM