The mighty Lance Klusener turns 38 today. If you dislike him, don't bother commenting on this one. I'm not interested.

For me, Zulu first introduced the concept of assaulting the ball in every sense of the word. Phrases like 'smashed', 'out of sight', 'thrashed' etc. that are used so often in T20 today, were all defined by Klusener. No other player could pull his team out of situations, the way Zulu did in the 1999 World Cup. On top of it, he did with a style that left everyone in awe of him. There was a widely circulating rumour that bowlers were afraid of bowling to a certain Lance Klusener because they could not predict in what manner their balls would be dismissed over the boundary that day. He humiliated the best of the best.

Of course, as the story goes, he later on crumpled under the pressure to perform and was subsequently removed from the team. What shocked me most was the fact that the man who fought like death to give South Africa hope, merely whimpered when he himself was in dire straits. Zulu, unfortunately was also responsible for providing me with my most heartbreaking memory of cricket ever. Yes, it still hurts. Ask any South African fans and they will tell you the same.

But I forgive him. Because despite all of this, he did a lot for South Africa. He won many matches, took many crucial wickets and scored plenty of runs. His contributions are evident when new hitters like Albie Morkel are called the next Zulu. Lance Klusener came at a time when South Africa was accused of playing boring cricket. Let's just say after the World Cup those critics were thrashed out of the ground and out of sight. 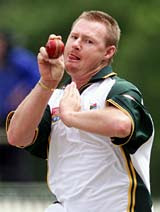 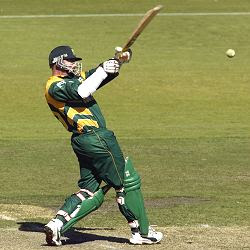 Just another day at the job
Posted by Purna at 2:02 AM

Happy Birthday to him!

A unique personality in cricket.

With biceps I'm sure my Es would enjoy too...hopefully not too much.

What's this? Stani and I have found one common interest? That better be all Stani. The world might explode otherwise.

O please, you know you love me really so why don't you just tell everyone and stop playing these childish games. Ha

This post is about Zulu and I refuse to tarnish it by stating something completely untrue. Move on.

I have Purn, and so should you.