Graeme the Buffalo, has very conveniently injured my Herschelle. During a warm-up match against WI, where Hersch was cruising mind you, the fat-ass hit a straight-drive straight at Hersch. Bald-man took action to avoid getting hit and ended up injuring his ribs. Tell me if I am wrong, but if you are hitting a straight-drive isn't it supposed to go past the other batsman, who is standing a little to the right anyway? Which can only mean on thing. Graeme Bastard Smith hit Hersch intentionally.

Either that or his elbow is still screwed and he must be rested permanently, making way for Botha to Captain SA.

3) Await the arrival of a Canadian Mafioso

If the Buffalo goes missing, you know where to look. Maybe. 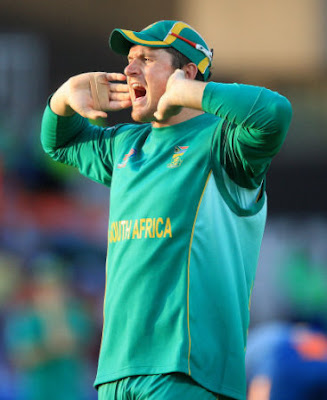 Scream all you want, no one can hear you
Posted by Purna at 12:18 PM

He'll only miss one game, but it's still a game.

You should have used the same photo as Brandon. I'm sure he wouldn't mind.

Is it confirmed then? Thank god!

LOl. Yeah I saw Bon's pic, GS's evil smile was obvious! But he looks more like a buffalo in this one.