Courtesy of India and Pakistan. I don't support either team, so I watched the game purely for the cricket. It didn't disappoint. It did not disappoint at all.

Pakistan's innings was sane. What a shocker! They've always had immensely talented players but would always do something impulsive and lose wickets. Bless Shoaib Malik for realizing that bang, wham is not the only way to play ODI's. But kudos to him for entertaining us later on as well. And Muhammad Yusuf is a champion batsman! He really needs to get himself on the map more.

Although, I must admit that I enjoyed watching the Indian bowlers getting beaten to a pulp. Strangely, Ashish Nehra has become a good bowler! I haven't been following India for about eons now but when I used to watch them regularly Nehra was new and crap. The occasional promising balls here and there yes, but overall crap. The penguin has come a long way. Harbajan on the other hand needs to be dropped. This is not debatable. As Bored and SP are all yelling at the top of their lungs...INDIA HAVE BETTER SPINNERS. This is becoming like the dark era of Bangladeshi cricket when overweight players like Akram Khan were kept in the squad simply because they were 'seniors' and had 'experience' that could not compete with International cricketers. Seriously BCC, we did it! You can too!

Not that Pakistani bowlers didn't take a hammering. Umar Gul went for 16 off his first over. Every god damn free hit went over the boundary while Gambhir was there. Then he forgot to dive. I remembered a very funny ad a long time ago which showed an Indian fan's frustration at the team's lack of diving. It had something to do with a detergent called Surf Excel. Get it? Diving will make their clothes dirty so they don't dive. But they have Surf Excel to make it shiny again, so why not dive? Must find that commercial somewhere. It was awesome.

Dravid's run out was pitiful. I must admit that I actually like Rahul Dravid. No one realized that he had sneakily made 76 runs (albeit using 103 balls) till he walked back to the pavilion. Considering India fell only 54 runs short despite losing their top order with 169 runs still required, I'm going to say that 76 was valuable. Dravid is valuable. He and Kallis are a rare breed of batsmen. Always criticized and unappreciated, but irreplaceable.

The whole match was a thumping, racing heart beat. Never a dull moment, just like ODI's should be. To put icing on the cake, there was a pitch invasion at the end of the match! When was the last time you've seen a pitch invasion? Watching the players scrambling for cover and people running around with flags...it is excellent to watch. I hope I am involved in one, at least once in my life! 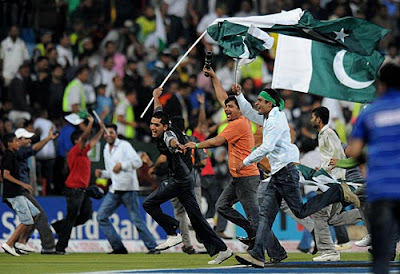 the seam bowling of both team was pathetic...
their slow bowlers bowled really well... still it was very close game then figures suggest...

ultimately pak won coz two of our best batsmen on display raina and gambhir had brain freeze...

Dravid and valuable yesterday? Valuable for him of course. A perceived value that despite being well set did not bother taking up the role of increasing the tempo, giving time for the new batsmen to get settled. Well done... Put the pressure on the young T20 turks and you go on to do your own business.

Add to that, he has become so slow in running between the wickets, I'm having nightmares imagining Ganguly was faster.

Depreciated value... yes! A great player will contribute somewhere even when he is at 40. To me, yesterday's contribution goes straight to the trash can. Every match no matter what the condition is, seems like a huge struggle for him!

I wonder what was the reason behind their brain freezes.

There was never any pressure of a run rate SP. Only after Raina fell did the run-rate start to climb up. Dravid fell shortly after. I suspect him taking 103 balls to score runs is actually his role in the team. The young T20 turks are supposed to clear the boundary while he holds his wicket. Who would have filled Dravid's spot in the team? Another young T20 turk who go berserk on the bowlers and then get out. Surely that's not better.

Yousuf on the map? What you mean? Date models? Not gonna happen. Not his fault people (like you) don't judge on purely cricketing reasons.

The only pitch invasion you'd be involved in is a streak in an attempt to get close to Graeme Smith.

Well, was there a need to go berserk? No. If that is such a fixed role, then it is really sad.

To maintain 6 an over required a small calculated risk from time to time.

The run-rate slipped down forcing Raina to start attacking. To be fair, Raina took it on himself to go after the bowling even before he was set. Now he could have got out at 12 in the process.

Stani, my first Pakistan match? Another one of your baseless comments. You just get more ridiculous by the day!
Date models...haha. You said it not me. That's how your brain works isn't it?

Scorpi, all I am saying is Dravid is following orders and doing a very good job at it. Why take all the anger out on him? But yes, he should take more risks. Even Kallis takes more risks these days.

Scorpicity, come on give Dravid a break. I think he played fabulously, not his fault if the others kept having a brain freeze from time to time.