He has begun plotting his revenge against England. It began by him backing out on his initial statement about this being the last Ashes series he will play in England. He then went back home, spent time with his lovely wife and daughter and realized that beating the Pommies in their own backyard means more to him then watching is daughter grow up. That's true cricket love.

He has retired from International T20, finally admitting that he is horrible at the format. Let's not kid ourselves. Ponting was crafted to become a captain, it doesn't come naturally to him. With Steve Waugh not around to hold his hand through T20, poor Punter was lost. His batting also took a hit and he plans to use his pitiable form to add to KKR's woes, while preserving himself for the 2013 Ashes. It is a brilliantly thought out evil plan. Because people will lose interest in watching KKR lose continuously and cost Modi a lot of money. That makes my heart beat faster with joy.

(Note to self: get Mortaza transferred from KKR)

Another upside to this news is that we get to see Punter take more hits on his face. It happened in 2005, it happened in 2009 and we are hopeful that it will happen in 2013. An Ashes series in England is incomplete without Ponting shedding blood. It's what makes the Ashes the most mafia-like battle of all. 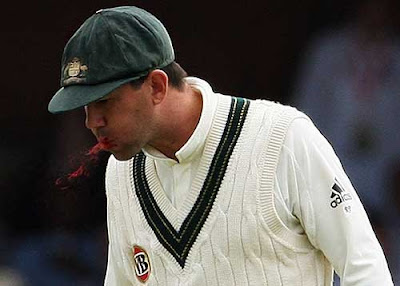 Either mine or their blood will be on the Ashes trophy
There's also a job opening now that the Oz T20 team is without a captain. I find it hilarious that Michael Clarke is not the automatic choice. According to an article on Cricinfo Ferguson, Haddin, White and Hussey are also contenders. The Australians really don't care much about T20 do they? The day Hussey is known for his T20 skills, I'll know that this format is officially for comic relief only.
Posted by Purna at 4:23 PM

No man, Punter is shit at captaining T20 games. I think even KKR knows that. Regardless let's figure out how we can get Baz and Mortaza out of this shithole!

I'd love to see Baz reign over Punter.

Bella I doubt Punter will actually play for KKR. He will either be on tour or make up some excuse. He doesn't give a shit about the IPL.