Playing with the emotions of a billion Indian fans like that! Scoundrels! Bastards!

First, Brett's tweety was enough to disturb Boom Boom, so Witchy got his wicket. Then Akmal slammed them all over the place. During the course of which, Hauritz dropped a catch and acted like he was really distraught. I thought he was seriously over-acting, just in case Australia lost the match and he could tell everybody how much he was beating himself up for it. I think you'll be better off apologizing for your spin Ritz. They don't care about your crappy fielding. They don't care about you, period.

To make Ritz look worse, Witchy Mitchy took a most difficult catch.It was so stunning that Crapinfo has a special picture to demonstrate how the catch was completed, in steps.

Step 1: Close your eyes and pray
Step 2: Open your eyes to confirm that you caught the ball and not your knuckles
Step 3: Pretend you knew you were going to catch it all along

Seriously, I know it's difficult to judge when the ball is so high and you have to run back. He did well. But what is so fantastic about this catch? Australia is expected to take such catches, specially with the American making them work so hard. Although, he needs to spend a little more time with Paine. The guy is like a frog without the sticky stuff.

I went to sleep for the rest of Pakistan's innings. They didn't score runs and they didn't lose wickets at regular intervals. So I decided it was a good idea to take my 5am nap.

Then the Aussies came to bat, needing only 206. You would think the would cruise through it, which they nearly were...with Hussey of all people, leading the chase. I think I've solved the Mystery of the Withering Hussey. He had amnesia. Now he doesn't anymore. Convinced? Neither am I.

But as soon as they realized that the Indians were watching, Ricky and his rotten men started their Shakespearean drama. The top order walked back to the change-room together and the middle order practically sprinted past them. They even gave Malik a wicket. Then Brett Lee came, the master of all Australian actors. The situation was stabilizing and it looked like the Aussies were going to win after all, but Binga knows how to entertain the Indians. He starred in a Bollywood movie. So he asked Witchy to go back. All of the sudden the Indians realized that Aus needed 17 runs, and their hopes lied on the shoulders of a fast bowler and a wannabe spinner. So starts the nail biting, the praying and the racing heart-beats.

They will. They were always going to. They just wanted to help your population problem with a few heart attacks. 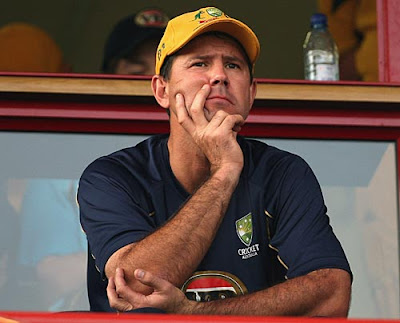 I better be winning an Oscar for this...

The only downside to this story is that we have to watch a England vs Australia game...again!
Posted by Purna at 11:33 AM

Haha! I got that feeling from Hauritz's catch too! It's not the usual Aussie tough b******d reaction of 'ah well, the next ones mine'.

Ponting keeping an eye on how many fielders we had in the circle! Little weasel started moaning at one point.

How could Australia do that to the Indian fans by taking it to the 2nd last ball?

Ponting seemed extremely pissed, even after the win. With good reason too. If Aus play like this in the semis, the Poms will win!

Australians are little devils that's why. They bring a lot of dark humour in my life.

Glad they entertain you Purn! Fucking hell, how you can go from being miles in front to on par with the required score is ridiculous. Pup was lucky he's been sent home or Punter would've choked him probably. He was pissed!

Sadly, I wasn't able to watch the match, so can't comment on the Haurtiz droppage factor - but on his acting skills, I am not at all surprised. I think Hauritz knows he was the last option for the Australian and is terrified he will be dropped if he makes even the slightest mistake.

I like him. I know I am alone in this.

that should say "Australians" - as in selectors.

Es, it's okay. It made the game interesting. I was just glad it wasn't the 1999 World Cup all over again, where Pak was out for 133 and Aus won in 20 overs. That was the worse ODI game EVER!
Ricky needs to work on his happy face.

LOL. I don't mind Hauritz, I just can't believe this is the man that's supposed to step into Shane Warne's shoes. Did Warne eat all the other spinners in Australia?

Warne was around for such a long time that everyone started bowling seam up in Australia..Hence they have so many fast bowlers coming up!! ;)
i really feel for that stuart mcgill guy ...poor chap didnt get many games but was a good bowler..

and pakistanis werent able to field well damn they missed atleast 5 run out chances towards the end! if only one was a direct hit! we could have had an india pak final :D

Adi,an India-Pak final would have been awesome. Who will you be supporting now though?

but i wish NZ win for the good of the game :)

If aus wins they will again start their World No 1 banter which i can't stand!!

I don't know about the final yet. The English tail-enders seem to be getting away from the Aussies again.

Hope the English have some sense in them and take the power play soon and get to around 250 to make a match out of it!