It's all his fault. Who wins the toss and chooses to bowl first when the pitch is expected to turn later and you have 7 bowlers in the side? The pigeon-brained individual also set a field that consistently allowed the the Sri Lankans to get runs during the middle overs. When they were already at 10000000 runs for the loss of 1 wicket! They didn't put pressure on the SL batsmen at all by stopping the singles and forcing them to play big shots. Ever heard of an attacking field setting Biff? Botes has!

Not that Parnell's rubbish balls wouldn't have gone for sixes anyway...seeing as he was bowling to DILSHAN. As pissed as I am that SL won, Dilshan was the bomb. Something that South Africa should have known and planned for! Bet Graeme had a hand there as well. 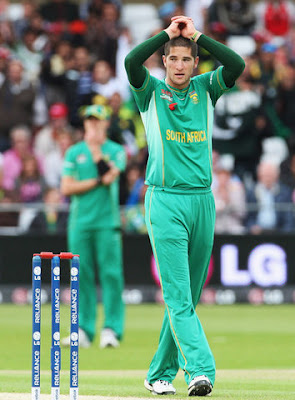 Find your form...NOW!
If Albie bowls one more over I am going to scream. 39 runs in 4 fucking overs! I think it's time we realized that Albie is the batsman and MORNE is the bowler. Remember Morne? The guy who didn't get picked for this squad? Well look how all the other bowlers have done now. 319 freaking runs and only 8 wickets. Brilliant! Specially when Sri Lanka has the three M's, one of whom has ears that distract the batsmen long enough to get their wickets.

If my Hersch was there the 319 would have been chased down in a flash. Even with Ajantha Mendis.

To add insult to injury the freaking RAIN ended the game. With Albie and ROFL still at the crease. Albie's mind-boggling upper body strength and ROFL's alien tactics would also have won this game. Unfortunately, the English team arrived in SA today and obviously brought the rain clouds with them.

Don't fret too much. SA still has two more games to go. One of them involve a showdown with their cousins from the island. We are just sad the reject won't be there.
Posted by Purna at 7:49 PM

Yep, some poor decisions for sure, but Sri Lanka are on fire at the moment so good decisions may have just made for a slightly closer match.

I have been so certain that South Africa are going to win this tournament. I may need a rethink.

Sri Lanka take on England on Friday ... that's a tough one to call :-)

Dilshan is my homeboy :D
It was great watching him. SA truly sucked big time and by watching their preformances, they deserved the humiliation.

saffers will always go with the pre-determinded plans... irrespective of what happens on the field... so parnell must bowl as many overs as has been decided and so will be the field settings... :)

Dilshan is transforming into a wild animal. They may have to cage him when he's not on the field. We've got a little ode to him on our blog today.

SL- Their bowling attack is pretty good - the 3Ms are unconventionally dangerous. The remaining guys just have to bowl steady/tight. Batting is a good mix too. They always seem to maximize their talents well.

Your boy Smith tried to make a match out of it :-), but he was dismissed and Mendis had his double whammy (Kallis, Duminy), the fat lady was out.

ROFL is from another planet, seriously. It might sometimes help sending him up the order to cause some havoc on top. What do you think?

Sid, I don't know about SL being on fire. They are becoming a yo-yo team. Highs and lows.

Bon, AB's saying its a good thing they started low. Now they can only go up. You think? I'm always happy when teams stumble in the beginning...if they can recover from it!

SP, damn these mechanical brains! Biff is UNABLE to change plans according to the situation. Stupid dodo bird.

Sujith, like I said Dilshan is the bomb. But my Hersch would have shown him how its done ;). I went to your blog but only saw the CT team analysis. Where is this ode? Post a link.
Smith is not my boy.Smith should not be anybody's boy.
I don't know abt ROFL being moved up. He isn't quite settled in his batting yet. Just hits it high and prays that his mothership will guide it to the boundary. Besides they still have AB and Albie to hit the boundaries. Botha does a decent job too.

ROFL might, might just be a gamble that works out. His job any way is to hit every delivery out of orbit. A top of the order impetus in a game like yesterday, if it clicks, might just put off someone like Mendis's line a bit. However, I'll take your word for it.

eh , it's not exactly an ode ...but still, with all the Dilshan love that's going around and everyone in the cricketing world and viewers ready to throw our undies and panties at him, I figured it would be ideal (scroll down the post):

I say don't open with Amla. SA have announced an Unchanged team. best would be to open with AB. They did so during the 50 over world cup and he did score at a brisk pace.
Anyhow AB isn't too comfortable against spin and Vettori and Patel might be handful if its played on a similar pitch as the SL game.
Anyhow i too blame smith, most of the times he waits for things to happen rather than making things happen.
Botha should be made captain.He was good in the series in Australia

anyhow hoping NZ win tomorrow! and the semi finals are decided on net run rates :) (but for that England has to win a match!!)

Aditya, if England wins I am going to have a heart attack and die. I swear!

Sameer, my Herschelle is still injured. If SA crashes out now Graeme will disappear off the face of the earth.

Purna you are spot on about Sri Lanka. They can be so inconsistent at times. I wrote them off during the t20 WC after they barely crawled over the finish line against Bangladesh and got trounced by the Saffers in the warm up games, but then they played so brilliantly throughout the tournament! But then they went down so tamely in the final. So unpredictable. Even though they played so well against SA i'm still worried they'll have a brain explosion against Eng and do something horrific!?

And don't be so hard on Smithy, he played well even though his captaining was off! sniff.. I think it was all his tough fighting talk before the match about them having no problem coping with the spinners that jinxed him in the end! I knew this would happen to them though. The last time they'd had such a long break from cricket was before the AUS tour to SA and they were so rusty that they lost the opening test series even though they were the better team. (which they proved by winning the ODI and t20 series thereafter) And they were duped into thinking they WERE match fit just because they crushed a 3rd string WI side. :(

Jan, hopefully the only people to have brain explosions while playing England will be England. We cannot let them win any other matches. People will stop watching cricket.

I can't help but be hard on Smithy. I was born to do so. Yes, that break was too long. They didn't even do anything productive! Should have at least played some club cricket. But they seem to be doing much better today. Phew.