First ODI: Australia vs England and the Champions Trophy

First of all, HAHAHAHA England.

Second of all, WTF Australia! A win by only 4 runs? Letting Ravi Bopara score 49 runs? Brett Lee giving 65 runs in his 9? Wait..why am I suprised? You are not the number one side in the world anymore :P.

You will also lose the Champions Trophy. This isn't some random conclusion. Let's look at it objectively:

Group A has Australia, Pakistan, India and West Indies. Chris Gayle isn't here, so Australia just may be able to edge the Windies out. India aren't at home, so they won't win any games. Also, they are still recovering from the ICC nominations. Even they didn't realize they have been playing cricket, what with all the super important fashion shows and commercial shootings they have had to do. Pakistan will stumble in the group stages, as is customary. If they stumble badly enough (i.e if Harbajan, by some miracle, is able to make the ball turn on a foreign pitch), West Indies might just go through. WI will win against India of course and lose to Pakistan in a manner that will still work for them. Points system. It's the ICC way.

Group B has South Africa, England, New Zealand and Sri Lanka. South Africa will win all their matches and England will lose all their matches. Sri Lanka will lose to SA and NZ and therefore finish third. I know you don't think its possible, but NZ has a track record of sneaking into the semi finals of most tournaments. It's Dan. He is the true Harry Potter.

Then we turn to the semis where Australia will play New Zealand and win, and SA will play West Indies and win. The finals will be between Aus and SA, just the way we like it. Aus will win the toss and choose to bat first. Ricky, Clarke, White and Ferguson will all go mad and put 450 runs on the board. In their reply, Biff will be blocked by his own fat and caught behind. Hersch and the newly slimmed Jakes will then take over and score over 150 each. AB and JP will contribute with 50's themselves after the two fall. The game will ultimately be won by Bouch and Albie's power hitting and Albie will say 'This one's for you Morne'.

Btw, if Bangladesh had been included by the ICC snobs, it would have been a whole different ball game altogether. The tournament would have been unpredictable and much more fun to watch as we surely would have killed some more giants. But they didn't. So you will have to wait till we cook up a storm in our own backyard against Zimbabwe to watch some exciting cricket. 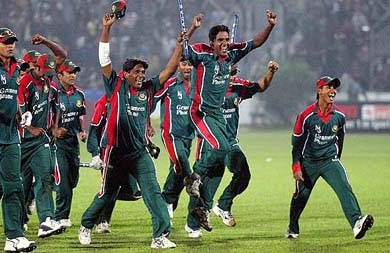 We don't need you 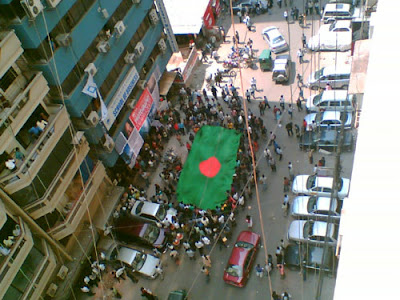 I'm just waiting for Stani to read this.