Dilshan...scored...2. Worst, he gave his wicket to man who wets himself. That made my heart explode and we had black everywhere. Yes, my heart is black. As if you already didn't know.

I am locking Sri Lanka's top order up in the Chamber of Violence, where unspeakable things happen. I can't repeat them and neither can they. But you can expect them to look like this after. 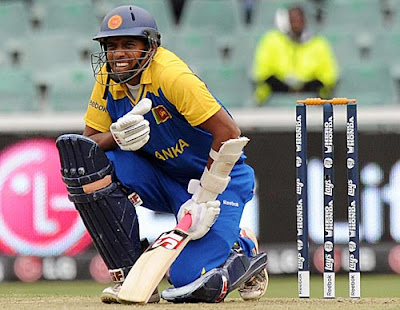 Okay, maybe I won't put Dilscoop there. But he should consider becoming Bangladeshi. That is the only thing that can save him from the Chamber.

But the 'BOMB' title must now be given to Kandambi, whose name is spelled wrong on Crapinfo. And who had a brain explosion the minute I wrote this. Or was it the all white Angelo that refused to move? Not so angelic after all are we...bastard!

Harsha Bhogle just said that Swann is not bowling well today because the pitch is not suited to off-spin. Harsha is actually English and thinks that Onions and Broad are legitimate surnames. Very grey.

England bowled 20 wides. Know what colour I'm feeling now? Purple. Because Barnie is purple and hilarious, but so fucking annoying that you want to buy a stuffed toy of the dino just to rip his head out. England is Barnie.

Strauss tries to play in the 'spirit of cricket'. Now he's getting the Cricketer of the Year award for sure. Cunning bastard.

Broad on a hattrick..I'm feeling blue...no oxygen due to intense rage kind of blue.

Sri Lanka reaches 200...golden is the colour of jubilation! Shut up, they were 5 for 81 at one stage.

Kula is Kool. I don't care if it's Korny.
Not out! Kula continues to torment England. HAHA.

Bah, it's over. The Lankans really are good entertainers. Even if it's utterly disgusting at times.

England to bat next. Yellow is the colour of revenge. Because revenge makes me come alive.
Posted by Purna at 10:49 AM

Purna, how do I face the world now?

KK, I promise you Saffa will murder them on Sunday. Now we just gotta get Dan's magic wand working again so they can do the same.

Sameer, they were despicable. Even the Windies showed more fight against Pak the other day. I have decided to stop loving SL forever.

Purna you're right about them being despicable yesterday, what did i tell you about the brain explosion? More like a complete brain shut down. But how can you allow such disgusting comments like "black rats" to just pass? Sameer's comments sound typical of a pompous arrogant Indian git and he seems to have forgotten what "pussy cats" his own Indians were in England in June when they were in the EASIEST of groups with not one but two minnows in Ireland and Bangladesh while Sri Lanka was in the 'group of death' alongside Australia and West Indies and ended up topping that group with convincing wins over both their opponents. Then in the super eights while Sri Lanka finished with 3 wins in 3 games India finished without a SINGLE win in 3 games!! The only time i could recall being more satisfied was when India was sent packing in the 1st round itself of the 2007 ODI WC, again at the hands of the Sri Lankans and does Sameer seriously believe all those matches i'm referring to played on English and West Indian pitches on our way to both finals were played on flat tracks? While them being "black" is the most irrelevant observation one could make when analysing a match, maybe it shows the extent to which Sameer's cricketing knowledge stretches and i wish he would stop talking out of his arse rather than undermine the skills of a quality team.

Hi Jan,
Good observations. I must apologize for overlooking the 'black rats' comment. I didn't associate it with the Lankans skin colour as I don't dwell much on such negative superficial things myself. But I really should be more aware and responsible since this is my blog. I am deleting that comment.However, that 'Indian git' bit was also unfair. There's no need to engage in country wars over cricket :). But I'm sure you know that, and you were just reacting to Sameer's comment.

Thanks for pointing out my mistake. Cheers!

Yup sorry, that was my temper getting the better of me :)