Since I was so successful with my Morne Morkel campaign (thank fucking god he didn't disappoint...with the ball anyway), I am launching one for Herschelle. It's time he is back in the squad. Even if he doesn't do amazing things with the bat, at least with him there will be no misfields galore. Ashy P is the WORST fielder in the side at the moment, apart from being a fucking useless batsman. Also, with the bowling being rubbish they need Hersch to keep the fielders motivated and put pressure on the batsmen. AB and JP honestly look like they are in lala-land half of the time. 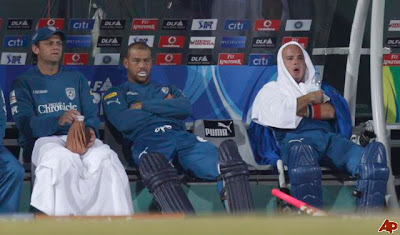 He likes to stand out. So when all you world class players are too busy copying each other's shittiness, you can be rest assured that my Hersch won't. Unless he gets out before you. 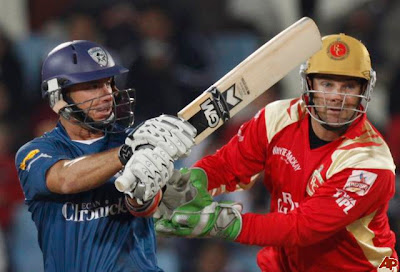 He will even smack his team mates for a win. Hersch belted the shit out of Jakes during the IPL 2 finals. And BRC has the most Saffers in their team. Hence, he will have NO PROBLEM violating Trott or KP. Unless of course, he gets out first. 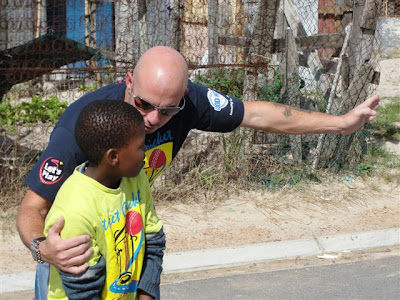 He has been spending extensive time with the person who taught him how to bat. He knew the Saffers would be worse than terrible and has been practicing hard. Thus, he is a good batsman AND an oracle. What else do you want? Yes, it would be nice if he also didn't get out so soon. 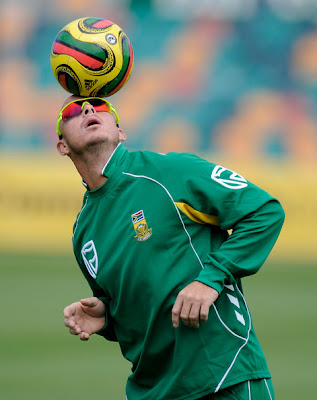 He is their best football player. No relation you say? Ever seen Hersch dance to spinners and smack them over the boundary? Plus, a skill is a skill okay. I know it won't help him if he gets out early. But were you ever recruited by Arsenal? Didn't think so. 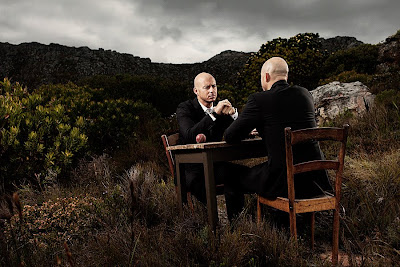 He is considering quitting cricket to become a model. Even though he looks good there, Hersch was meant to bat his way down the pitch, not strut is butt down a ramp. Plus if he retires CSA will feel the wrath of Cricket Minded.

Oh stop bringing that up! He will ruin the English bowlers if he doesn't lose his wicket early. And if he does, how is it harming the Saffers really? Ashy P will also his wicket early won't he? But what he won't do is bat well once the bowlers are tired. It's not in his genetic makeup.

Biff finally woke up and talked about selection changes. It's this one. Drop Ashy P and take Hersch. Can you think of any other Saffa test opener better than Hersch at the moment? LET HERSCHELLE PLAY. And Friedel. They come as a package deal after all.

I officially support this campaign :P

That top photo looks like it was taken at night, yet Roy still has zinc on his lips - I'm starting to think he has it tattooed on now.

And Purna, should this campaign be successful, are you confident that hersch won't disappoint? I'm not. Having said that, I'll support your campaign so long as Hersch keeps his shirt on.

Sid, Let him be. He doesn't have much going on for him, other than the tattooed lips!
Well I haven't watched Hersch play in a test in eons. So I can't say for sure. But his technique and his fielding is so much more better than Ashwell Prince's and Mckenzie's...he should be in by that merit alone!
And if he doesn't play, he may have to take his shirt off even more to pay his bills. Think about that.