And Barbie has an attitude problem. And MSD has been banned as has Sulieman Benn for pleading not guilty. All highly dramatic in the manner of a twenty year old over-stretched, over done soap opera. But slightly more funny and definitely more important because it seems to be raising questions about racism.

The exact reasoning behind why Benn was handed the ban is unclear since Haddin and Johnson was equally involved. Benn talks A LOT and he has been verbally after the Aussies for a while now, but honestly it was just an accident stretched like chewing gum by some passionate men. And chirping is allowed.

In the other end, MSD got banned for two games for not dissent, but having slow over rates. It took India friggin' long to get through their overs because of too much discussion (and it didn't help that Sri Lanka needed a runner) so the general consensus is that it is justified.

Then we have Barbie and Watto. Broad showed dissent to the umpires and Watto celebrated excessively. Watto went up to Gayle's face when he got his wicket and did this: 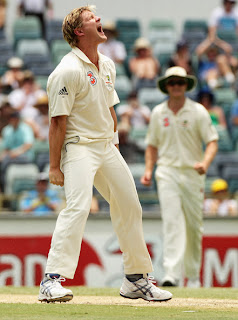 It was deliberately telling Gayle to 'Fuck off' and he got warned for it. So did Barbie. Now you see the problem.

The two coloured players got banned while the five not-coloured people got warnings. But MSD's had nothing to do with bad behavior and although two ODI's might be too harsh a sentence it shouldn't raise any such issues. But it might, because of all the other things that are going on right now.You can read a good debate about Sulieman Benn's sentence here but what I want to ask is, did Watto, Broad, Haddin and Johnson get lenient treatment because of the colour of their skin?

I'm going to go with no. Not because I am in denial of the existence of racism but because there is nothing extraordinary about any of the events here. All of this has happened in cricket before and have been dealt with differently. Australia is a prime example of a non-coloured team being fined for bad behaviour. The wrong that has happened here is Benn's extreme sentence, probably because he naively denied his guilt. He was right of course, he wasn't guilty of anything other than losing his temper and who the fuck gets banned for that in sports? Unless they have killed or punched somebody. But Haddin and Johnson, the clever bastards that they are, pleaded guilty and it's probably something they just said because they were aware of the consequences. Benn didn't. He is simple like that. He just wants to play cricket.

Even after the ban he is trying his best to bowl the Aussies out and fighting hard. I like the fact that he is treating the ban as an occupational hazard. Chris Broad could learn a thing or two from him. But he is probably too busy trying to exercise his powers over the umpires in South Africa for not accomodating his little boy's temper tantrums.
Posted by Purna at 3:29 PM

Interesting post. Must say I disagree though - perhaps it wasn't racism in the sense of coloured judgement happening this week, but the treatment of Benn in comparison to Bollinger (in Adelaide), Ponting (who hasn't been charged at all over the push), Brad Haddin, Shane Watson and to a lesser extent Mitchell Johnson is thoroughly disproportionate and smacks of a bias toward the Australians. This might not be a colour bias (if it had been Nash, not Benn, maybe he would have got the same sentence) but it leaves a nasty taste in the mouth and suggests a bias toward Australia as being a team with greater influence in world cricket. Not exactly racism, but power-games and bias nevertheless, and that is almost as deplorable.

Valid point. But Australia hasn't really been spared in the past over their behaviour. I saw the Ricky shove and Bollinger's attitude but a little bit of that will come in competitive sport. It's not something you condone by any means, but you can't really be on their case for everything. Haddin and co. obviously has a good management team, who have adviced them to do damage work by pleading guilty and giving 'I regret it' interviews. Benn didn't do anything of that sort, which is fine. But I think the ICC look at it as 'how dare you disrespect our gentlemanly game by pleading not guilty to your bad behavior' as opposed to Australia is a far superior team so will be spared. The ICC is fucked, but that's a given isn't it?

Its disappointing and very idiotic. He was basically punished for not pleading guilty. I don't think its a colour thing, but as MG said, there is some bias. I agree about the fucked-ness of the ICC.

And Shane Watson... glass framed, muppet head son of a gun. I hope he now realises Chris will be out for him.

Reisa, as much as I dislike Gayle I hope he gets the muppet and breaks him into pieces.

As you have probably guessed from my own blog, I think the whole thing in Australia is a load of bollocks. In response to Barbie's dad behaving like a f*ckwit in Australia, I paid off the umpires in South Africa to whack Barbie's behind a few times for nothing. It was the least I could do.

Is Barbie getting fined then? I hope so. That kid thinks he is king of the world. E's just like his old man.

Watson is Twatson for ever. Made a complete wally of himself. As he does.

Sid, I signed that. If only the ICC listened to the people!

Twatto is at it again.