Maky became the first coloured player in South Africa to play 100 tests. Only 7 fast bowlers and 49 cricketers (out of 2,600) have achieved this feat.

That's right. Maky got a fridge for his sweat, injuries and hard work. Castle Lager hopes he will fill it with their beers I'm sure, which indirectly means their sales go up. What if he has no space in his house for a fridge? What if the fridge completely fucks up his kitchen setting? What if his wife does not want another fridge?

Castle Lager did not think this through. They just found the cheapest thing on sale and got it for him. It doesn't even encompass anything he is. Makhaya is a firing, fast, fierce individual with a rhino forehead and wants to knock every batsman's head off. The fridge is a cooling appliance and just sits there.

Nope, they did not think this through at all. If it were upto me I would give Ntini a jacuzzi where steaming hot water rushes down at great speed and mesmerizes everybody. Or I would just give him the Niagara Falls. 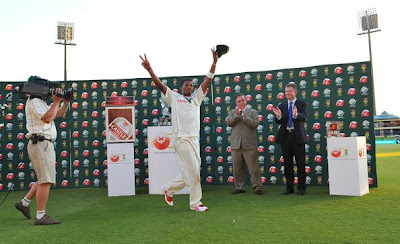 Yes Leela. You would think he bought a house..or just got married!

A Fridge? Must be some promotional stuff they're giving to him free....

But I certainly am a huge fan of Ntini....

hahah well, I mean if you look at all those other gifts sponsors deem useful I would prefer the fridge anytime. For instance, during the Aussie series in India, half of the Australian team got equipped with little red mopeds. I was so hoping that one of the guys would become MOTM twice and go home with two of these embarrassing vehicles.

Or look at the recent series, Chris Gayle got a mobile phone. Chris Gayle. The man with his own plane. I am sure a mobile phone with an Australian contract is something he was craving all his life. Oh, maybe he can use it during his T20 cameo.

Wes, Gayle has his own plane?? WHAT THE HELL! And thank you sooo much for that article. It was funny. Although I must tell you Aussies will NEVER say good things about an English cricketer.

Unless it's Michael Vaughan and the 2005 Ashes maybe.

Umm. He obviously pulled my leg successfully. Damn voodoo man! My eyeballs fell out when I read it
But that tweet was obviously a joke. Oh man it was so credible :(
Gayle article