Apologies for the sudden disappearance. Turns out textbooks have more to say than all of bloggerdom combined. But with the first test just four days away, the nerd has been shown the door and the cricket fan has been released from her hell-hole. Only to find at that the English cricket team has been infested by impostors.

Cricinfo tells me that someone by the name of Graeme Swann has taken six wickets in some warm-up match. Now the Graeme Swann I know, is only capable of doing that in his home ground against unstable teams. The unstable part may still hold, as this is some South African Invitation team, but although it says the match took place in East London, it's not quite the same. So I can only conclude that someone has decided to impersonate the man, while he happily twitters himself into oblivion. This guy is so good that even his team-mates have been fooled and are calling him one of their key factors. In case you did not know, I don't like Swannyg66, but this is cruel and the impostor really must be punished for making the world believe that Swann is good at anything else other than twittering. Having said that, if this is the real guy I look forward to watching him do the same in the tests. I also look forward to watching Julia Roberts, in the form of Ryan Sidebottom, take five wickets.

No, I have not started liking them. But I realized over the last few days that every person I have dismissed as a mediocre cricketer have begun to perform. Obviously it is an effort to impress me, as I am a very important factor in their lives, but being proven 'wrong' time and time again is fucking annoying. Not that any of them have because warm-up matches don't mean shit. But I really do like it when England underperform as you already know. Since I have started blogging, they've won the Ashes, knocked the Proteas out of the Champions Trophy and even clinched the ODI series in Saffaland. This is not good for my mood and I like to be happy. In my own twisted, sadistic way. So I am refraining from taking the piss out of them just in case they do something silly like win against the Saffers while trying to impress me. I suspect this will only last for a couple of hours, but if England can be applauded for trying their best for a gazillion years, why can't I?


I also suspect this series will take a toll on me, physically and emotionally. I need to find a way to protect myself. Maybe I should just follow Andy Flower, who is the epitome of being high in this picture. 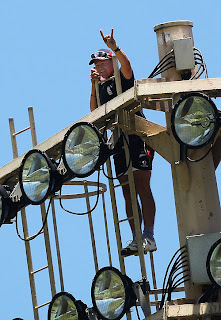 Hey welcome back, I hope things went well ;)
*bites tongue off on the rest*

Yeah, there is no way that it is our "lion meat" graeme swann, it's clearly someone (possibly Hauritz?) in costume.

Sid, Hauritz can be in two places at the same time?

Purna, I am stunned at your ignorance. You should know by now that Lord Nathan can do anything he damn well wants.

He'll be dead meat in the test series. He did brilliantly in the warm-up matches before the one dayers then took about 1 wicket for stuff all in 2 or 3 of the real matches. In fact, apart from that five for in the last ODI of the 6 - 1 loss and all the Oval wickets on a scorching turner he has been pretty much pants since the West Indies toured England. If only he was half as good as he thinks he is.

Vim, I hope you are right! He is not that great but somehow batsmen play stupid shots when he is bowling. How can he be England's first choice spinner?